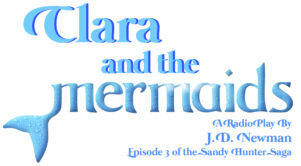 Twelve-year-old Clara doesn’t know what she wants to be, but she knows doesn’t want to be a miniature version of her mother, Sandy Hunter Gentry. Clara imitates those around her, including a shy girl named Paisley, and her pretending leads her into the world of drama and theatre. She adapts and performs her own version of Hans Cristian Andersen’s The Little Mermaid and stage manages her elementary school production of Disney’s musical version. Clara comprehends how the mermaid lost her voice by changing herself for others and how she found peace by being true to herself and her instincts. This third story in the Sandy Hunter Saga, presented through letters, emails, and text messages, and inter-personal scenes and written to be presented as a radio broadcast, takes place 37 years after Sandy and the Weird Sisters and brings the story full circle as Sandy shares her twelve-year-old self with her own twelve-year-old daughter.

This Radio Version can be used as a ZOOM Performance, as a Reader’s Theatre (with or without social distancing) or a fully staged production, or a staged radio play.

Clara and the Mermaids
A Radio Play

adapted from his novel

THIS NOTICE MUST APPEAR IN ALL PROGRAMS, ON ALL POSTERS AND PUBLICITY MATERIALS AND INTERNET ADVERTISING/WEBPAGES FOR THE PLAY:
“Clara and the Mermaids: The Radio Play is presented through special arrangement with Leicester Bay Theatricals.  All authorized materials are also supplied by LBT, www.leicesterbaytheatricals.com”