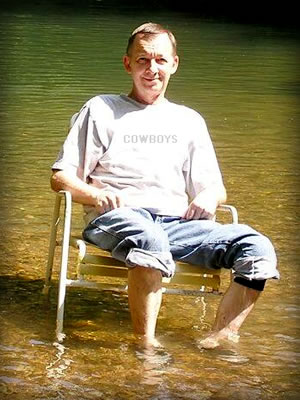 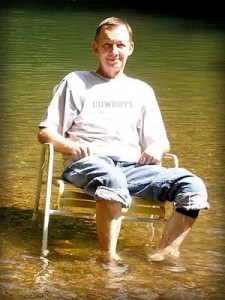 I am a native-born Tennessean and proud of it. Years ago I followed in the footsteps of my hero, David Crockett, and journeyed from Tennessee to Texas. To my surprise I discovered that the Alamo was not only being remembered, but was quite secure. Somewhat disillusioned, I settled in Arlington anyway, thinking that I should keep an eye on things.
For fun and food I designed and developed software for many years. Somehow I’ve managed to squander time writing various things, some of which are described on my own web site. I currently keep watch over three cats, Milton, Berle, and Penny, as well as continuing to discreetly monitor the Alamo situation.
I have been a creative writer in some form since about the second grade, beginning with poetry. Limericks were, and still are, fun to write. During my teen years, I drifted into writing short stories. Still later, I wrote poems, songs, and stories for my wife to use in her kindergarten teaching.
My first writing that was drama related involved monologues. My wife was teaching a drama class in Mansfield, and needed some monologues for a recital. She didn’t like what was available, so asked me to provide something. The students loved them, which was my goal, as I’m certain that an actor performs noticeably better when they really like their material.
Next I was asked to help adapt the Robin Hood story for a play at Creative Arts Theatre and School (C.A.T.S.) in Arlington, Texas. That led to a couple more minor works there, such as adding a character or songs to existing scripts.
My son, Jason, had been performing on stage since he was around 6 years old, and since I had sat through literally hundreds of performances, felt as though I had a pretty good idea of what actors and audiences would find fun and entertaining. I enjoyed putting those ideas to practice.
When Jason was asked to direct Hansel and Gretel at C.A.T.S. during his senior year in high school, he hesitated, as the script provided was rather lame. I offered to write a script for him if he would take the opportunity to direct. He and I quickly put together a musical version of Hansel and Gretel that had a very different slant from the original version. It was quite well received by the actors and the audiences.
Since then, I have had two collections of monologues published by Contemporary Drama, two collections of monologues published by Encore Performance Publishing, and two plays published by Encore Performance Publishing. One of the published plays is “Robin Hood and the Magna Carta,” which combines the Robin Hood legend with actual English history. The other play is a musical spoof of the Frankenstein story, which is anything but traditional.
Almost by accident, I also wrote a cookbook along the way. I may well be the least famous person to have had a cookbook published by a royalty-paying publisher. I had written a group of humorous short stories concerning life on a southern farm in the 1920-40s. For some bizarre reason, I decided that the best chance of getting the work published was to incorporate the stories into a cookbook. Since the stories are set during the waste-not era of the Great Depression, I rounded up a number of recipes from that same time frame, and then found a publisher (Quixote Press) who happened to be looking for an old-fashioned country cookbook manuscript.
“Grandma’s Cookbook” was subsequently published, and contains some very interesting recipes, such as those involving “recently deceased opossums” and jellies made from cow parts not normally used for human consumption anymore.
Straying from playwriting in 1999, I wrote a mystery novel set in the Arlington area, “In Over Your Head; A Cody Bryan Mystery,” just to see if I could. I published it through ToExcel, primarily to use as Christmas gifts. It was fun to write, and garnered good reviews, so I wrote the second of the series, “Shot at and Missed,” set in the Virginia/Washington, D.C. area. Then I wrote “Deep in the Woods,” a young Appalachian girl’s coming-of-age type mystery novel, with a touch of science fiction thrown into the mix. This book had been tumbling around in my head for a decade, and I finally got it down on paper. The sequel is still primarily in my head.
In 2007 the publisher at Quixote Press asked whether I’d be interested in writing a book of ghost stories to add to their series. Why not? Since then I’ve written four ghost books and another cookbook for them. The first ghost book, “Ghosts of Lookout Mountain” has just been released. Hopefully the others will follow soon.
I write because it is fun, and a creative challenge. It is also personally fulfilling to provide entertainment for others. Since my novels are available via the major online bookstores, I have received emails from people I’ve never met who have read and enjoyed my writing. A guy wanted to know if one of my female characters was real and had a phone number. A college drama class utilized one of my monologue books in their studies, and wrote to me asking for background information behind the writings.

I don’t have a particular formula for writing. Sometimes I start with outlines, but not always. The “Woods” novel began with me knowing only the very ending scene. The first “Cody” I began writing without knowing much about the plot. I created a character and let him tell me the story as we traveled from beginning to end. The second “Cody” had me writing various chapters, totally out of sequence, and then putting them together with putty. I really enjoy writing dialogue, but that is probably the toughest part of writing. Often what looks good on paper is lousy when spoken aloud. (I think we’ve all seen many examples of that on television and movie screens.) At least three fourths of the time spent on the ghost books is in research, as the settings need to be easily recognized.
I am currently working on the third Cody Bryan mystery, set in New Orleans, and also a sequel to the “Woods” novel. Several more plays are in various stages of completion. Of course I still write the occasional poem. Unfortunately, my everyday life severely interferes with the time I can allot to my writing. I am always interested in hearing from people who have read any of my work or have simply visited my website, www.larryhillhouse.com.