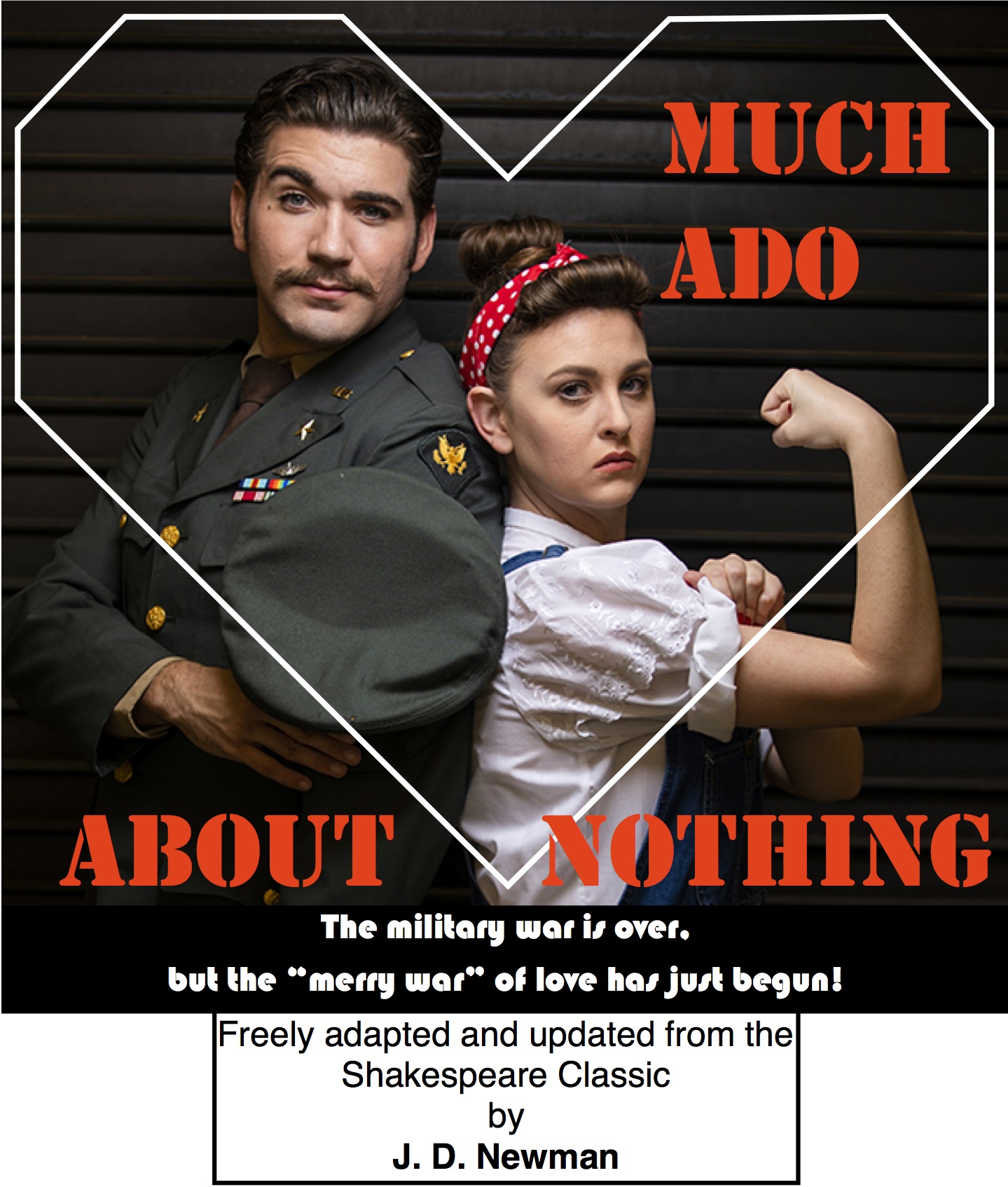 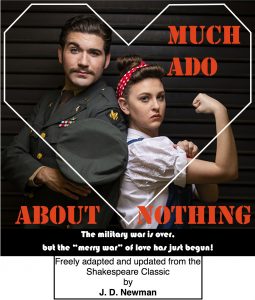 Freely adapted and updated from the Shakespeare Classic by J.D. Newman

The military war is over, but the “merry war” of love has just begun! Considered one of Shakespeare’s most popular comedies, join Beatrice and Benedict, Hero and Claudio as they navigate through mine fields of words and jealous rivals to the safety of finding that one person with whom you truly belong. Drawing serious and frivolous into one realm, the show tells of nobleman Leonato, who shares his home with his daughter, Hero; niece, Beatrice; and elder brother, Antonio, as he welcomes friends home from the war. The play is set in 1945, just as WWII was coming to a close. A time in history where feminism had just experienced more progress than it ever had before. The Allies quickly realized that the only way to victory was to incorporate the efforts of as many citizens as possible. While men were being drafted to serve as soldiers, women were encouraged to take up jobs that had been previously deemed “man’s work”. They were working in factories building and fixing planes, working as conductors, and driving trucks and fire engines. And for the first time in history, women were officially recognized as part of the military.Traditional gender roles are confronted as women who went to work are finding that they are now expected to return home. The dark time of the war has finally passed. Women have been holding down the Homefront and the boys are returning to rejoin everyday life. And while some young men are looking forward to the romances in store, there are others who swear to never fall prey to the distractions of love. Beatrice, is a “Rosie the Riveter”-style hero with her sharp words and independent streak. Her rival-turned-lover, Benedick, is a returning war hero. Their friends determine to test their stubbornness and start a game of matchmaking and mischief that turns everyone’s world upside down. Benedick and Beatrice, who “never meet but there’s a skirmish of wit between them”, stand head to head and go toe to toe.  The romantic tension is palpable and the clever banter sends sparks flying.

ARTWORK ABOVE: LOGO ART made from images supplied by the Utah Valley University premiere production in November of 2018, featuring Jacob Thomason as Benedick and Sam Sanduk as Beatrice. Used by permission of August Miller, UVU Marketing.

UVU’s Much Ado About Nothing Will Leave you Laughing, Crying, and in Awe of the Talented Cast
On November 12, 2018 By Rachel Ricks

“…The cast is impeccable for Much Ado About Nothing. The amount of talent on the stage was very enjoyable to watch and kept me constantly engaged throughout the whole performance, which in and of itself can be a feat when taking the original Shakespearean text and setting it in a more modern (1945) setting…
With this talented cast, it doesn’t matter what your familiarity levels with Shakespeare are, you can be sure that you’ll be in for a fun-filled and enjoyable evening. So be sure to put UVU’s Much Ado About Nothing on your must see list!”

Unlike the original play of Much Ado About Nothing set in Italy, UVU students performed the play as though it was set in 1945… In this production, Dr. John Newman, the director[playwright], chose to adapt the setting in 1945, when WWII was coming to a close…In this production, grammar, nouns and titles were updated, and some of the lines have been trimmed…A few characters have been fused and a few of their lines reassigned. Shakespeare’s lyrics have been grafted into 1940s music…Newman’s decisions clarify Dean John’s motive and the reason why Beatrice falls in love with Benedick, which confused readers in the original play…I think it makes [Much Ado About Nothing] a little more accessible for people that maybe aren’t as familiar with the play”

The following is how the credits should read in all programs, posters, fliers, handbills and other promotional advertising for the show:
Much Ado About Nothing
by William Shakespeare

THIS NOTICE MUST APPEAR IN ALL PROGRAMS, ON ALL POSTERS AND PUBLICITY MATERIALS AND INTERNET ADVERTISING/WEBPAGES FOR THE PLAY:
“Much Ado About Nothing is presented through special arrangement with Leicester Bay Theatricals.  All authorized materials are also supplied by LBT, www.leicesterbaytheatricals.com” 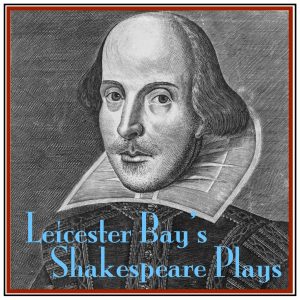