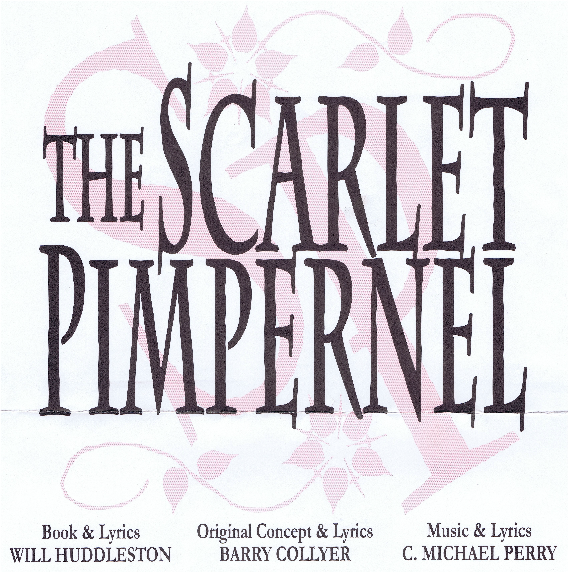 Book and Lyrics by Will Huddleston

Sir Percy Blakeney, The Scarlet Pimpernel, is the 17th Century equivalent of a modern “super hero”. This Englishman has rescued countless victims from the jaws of Madame Guillotine during the French Revolution. He has eluded the French authorities by his wits and clever disguises. A member of the French Committee for Public Safety named Chauvelin, is on his trail. He has married the most beautiful and popular woman in all France, Marguerite St. Just. But the marriage has turned sour due to unspoken confidences and Sir Percy’s need for utmost secrecy. This fine thriller takes us through the streets and countrysides of Paris and the French and English coasts on a ride of intrigue. Passion, history, mystery and comedy all set against the backdrop of the French Revolution.

Available to ALL producing groups. This show is available in the PREMIERE MUSICALS collection.

The PERUSAL PAGES file is in PDF format and contains the first half of this 4-act musical: ScarletPimpernelPERUSAL

SONG LIST (songs in BOLD are in the Playlist below)

SONG SAMPLES (The DEMO mp3s of these songs come from the FINALE files containing the orchestrations to the show. The melody is played through a synthesized voice, and the orchestral instruments using the Note Performer sound modules swirl around it.)

Book and Lyrics by
Will Huddleston

THIS NOTICE MUST APPEAR IN ALL PROGRAMS, ON ALL POSTERS AND PUBLICITY MATERIALS AND INTERNET ADVERTISING/WEBPAGES FOR THE PLAY:
“The Scarlet Pimpernel is presented through special arrangement with Leicester Bay Theatricals and their Premiere Musicals program.  All authorized materials are also supplied by LBT, www.leicesterbaytheatricals.com”