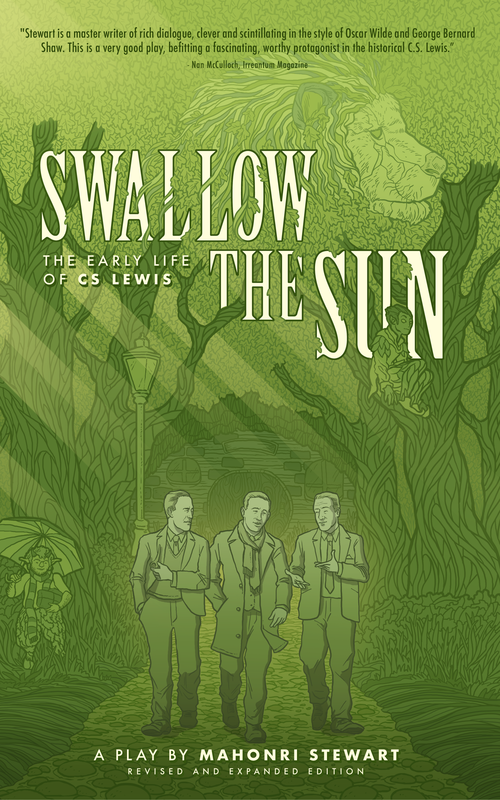 C.S. “Jack” Lewis became an internationally renowned author, famed creator of Narnia, and the 20th Century’s most eloquent defender of Christianity. Little do most people know that he was once an entrenched atheist. This play by Kennedy Center award-winning playwright Mahonri Stewart recounts the powerful spiritual journey of the “most reluctant convert in all of England,” as he grapples with bold figures of faith like J.R.R. Tolkien, as well as a persistent god who hunts his soul relentlessly. Yet the worth of that soul is manifest in a struggle that will create a legendary legacy.

“STEWART IS A MASTER WRITER of rich dialogue, clever and scintillating in the style of Oscar Wilde and George Bernard Shaw. This is a very good play, befitting a fascinating, worthy protagonist in the historical C.S. Lewis.” – Nan McCulloch, Irreantum Magazine

“THIS IS A PLAY BUILT ON THE TENSION  BETWEEN SPIRITUAL AND SECULAR APPROACHES TO LIFE. And the playwright pulls no punches … Stewart doesn’t gloss over such things but allows them to find their own level. He lets the audience decide what to think … I liked even more the notion that writers and playwrights are no longer giving us ‘dual versions’ of religious souls — one version where the subject can do no wrong and a ‘revisionist’ version where he or she sins at every turn. Artists have finally begun to offer us fully fleshed out, rounded portraits of spiritual souls.” – Jerry Earl Johnston, Deseret News

“STEWART ALSO HAS A DEEP KNOWLEDGE OF THE WRITINGS AND BIOGRAPHY OF C.S. LEWIS … This accuracy is an authorial choice that respects the people and that ultimately adds to the believable and unique characterization and setting of the plays.” – David Allred, AML Reviews

“WELL-WRITTEN, FUNNY, AND THOUGHT-PROVOKING … Swallow the Sun is a captivating journey from doubt to belief.” – Scott Hales, The Low-Tech World

“POWERFUL IMPACT … Despite being a conversion story, it tends towards the intersection of the intellect and the spirit rather than a repetition of the conventional narrative of personal conversion through warm feelings about historical propositions … [This play] spoke deeply to me … [as someone who] views my own faith through the lens of the perpetual tensions this exacerbates: tensions between secular and sacred, insider and exile, spiritual and intellectual, narrative and history. I think that I am far from alone in that category, however, and that there will be many more people for whom [this play] will resonate deeply.” – Nathaniel Givens, Times and Seasons

“YOU WILL LAUGH, YOU WILL THINK, AND YOU WILL ENJOY IT … this play will stay with me for a long time.” – Jennifer Mustoe, Front Row  Reviewers

“INTRIGUING AND COMPELLING … The play has a fascination about it that holds the audience’s attention …the storyline is wonderful. Swallow the Sun is a play well worth seeing.” – Rodger Hardy, Deseret News

Swallow The Sun: The Early Life of C.S. Lewis

THIS NOTICE MUST APPEAR IN ALL PROGRAMS, ON ALL POSTERS AND PUBLICITY MATERIALS AND INTERNET ADVERTISING/WEBPAGES FOR THE PLAY:
“SWALLOW THE SUN: THE EARLY LIFE OF C. S. LEWIS is presented through special arrangement with Leicester Bay Theatricals.  All authorized materials are also supplied by LBT, www.leicesterbaytheatricals.com”