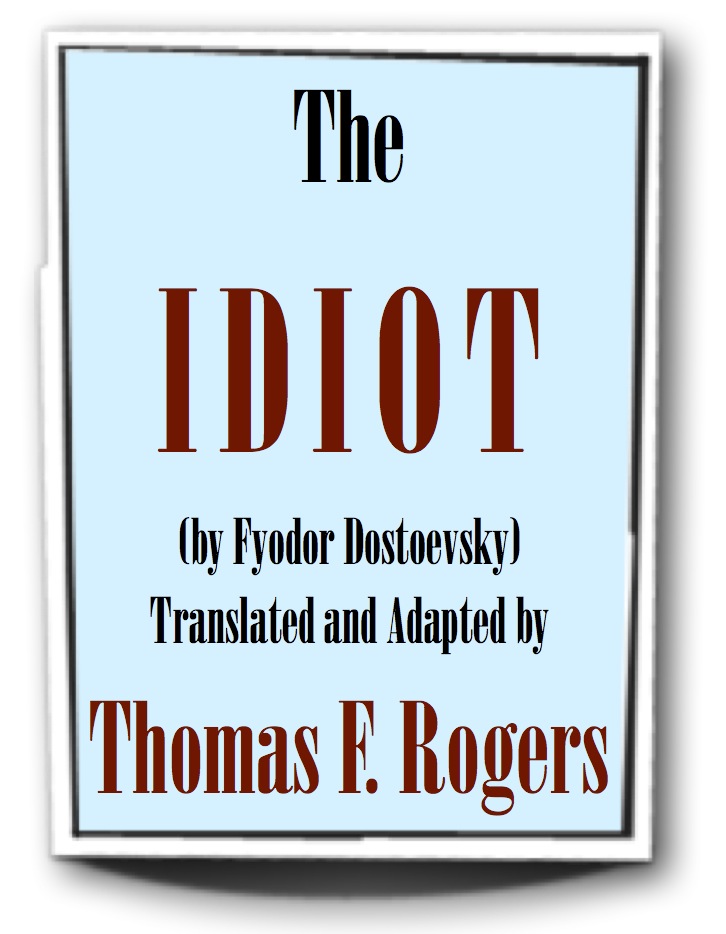 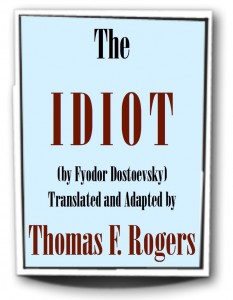 by Thomas F. Rogers Translated and adapted from the Dostoyevsky novel.

How would the world react if the Savior of the World again suddenly appeared in the guise of just another mortal? The profound Russian writer Dostoevsky inserts such a character in each of his four major novels—in CRIME AND PUNISHMENT the prostitute Sonya Marmeladovama, in THE POSSESSED (or THE DEVILS the false Messiah Stavroginm and in THE BROTHERS KARAMAZOV the maligned but holy abbot Zosima and his righteous disciple Alesha. In all literature there are in fact very few memorable ‘Christ figures.’ Don Quixote may be one as well as another Russian author’s protagonist, Boris Pasternak’s Doctor Zhivago. In the opinion of this stage version’s adaptor, the hero of THE IDIOT, Myshkin, is the most complete and impressive of them all. Myshkin’s characterization and the novel itself are filled with irony. Like Christ, Myshkin is a prince (in Russian, a rank of noble, aristocratic heritage). However, his surname derives from the word for ‘mouse,‘ in turn suggesting his meekness and the lack of regard with which he is viewed by others. Despite his earnest, self-sacrificing efforts in their behalf, he fails to influence their lives for the better, as with the general default of many an ostensible Christian over time. Myshkin is viewed, instead, as odd and eccentric–an ‘idiot.‘ As with Alesha, his counterpart in THE BROTHERS KARAMAZOV, Myshkin’s only success is with children, who are uncorrupted and innocent. Set in nineteenth-century Russia’s high society milieu–both the novel and its stage version focus on Nastasya Filippovna, a beautiful woman, vied for by various men who would eitther make her their mistress or marry her for personal gain. The lone exception, Myshkin, is willing to rescue her and redeem her reputation by offering to marry her for totally selfless reasons. “Such beauty could save the world,” he declares when he first sees her portrait and recognizes her spiritual potential. Nastasya nevertheless refuses him, vengefully throwing herself into the arms of Myshkin’s destructive nemesis, Rogozhin, rather than accept the forgiveness that would also require her to forgive those who have so misused her. On an allegorical level, Myshkin’s and Rogozhin’s rivlary illustrates the contest between everyone’s superego and id over his or her very soul (anima)–hence the story’s universal psychological and spiritual import. At curtain, we view an ironic pieta: two men, both grief struck, sit on either side of the prostrate woman one of them has just slain, the other attempting to console him. As in his other memorable works, Dostoevsky’s THE IDIOT trains a rare spotlight on, besides the lust for money and various other human failings, the chauvinistic exploitation of women, to which, in the person of a lone character (Myshkin), is contrasted the empathy and altruism mandated by Christian ideals. Although Dostoevsky’s darkest novel, THE IDIOT also displays a deep vein of hilarious humor. Its tragicomedy is near operatic and great theatre. As the critic George Steiner once observed, Dostoevsky possessed “the most natural dramatic temperament since Shakespeare.

The script is also available in a Russian translation.

a translation and adaptation of the Fyodor M. Dostoevsky novel
by
Thomas F. Rogers

THIS NOTICE MUST APPEAR IN ALL PROGRAMS, ON ALL POSTERS AND PUBLICITY MATERIALS AND INTERNET ADVERTISING/WEBPAGES FOR THE PLAY:
“The Idiot is presented through special arrangement with Leicester Bay Theatricals.  All authorized materials are also supplied by LBT, www.leicesterbaytheatricals.com”