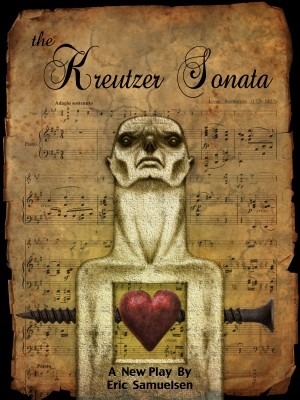 A harrowing exploration of the mind of a murderer, a man driven mad by unfulfilled passions – and Beethoven’s music. This cautionary tale of rage, revenge and remorse is interwoven with a live performance of Beethoven’s sonata on violin and piano, who become vocally-silent characters in the action, yet their music speaks volumes to Pozdnyshev’s mind and to the audience. The music is the key to an act of murder. Of course, that murder is an unspeakable act of utterly unjustifiable barbarism. But, at least, we have to understand why it’s such a trigger for him, why it launches him to act so horrifically. But we also have to retain our own civilization, our own sense of the beauty of Beethoven’s accomplishment and our own compassion for the lost souls Tolstoy created. Tolstoy’s protagonist cannot hear the remarkable violin sonata Beethoven wrote for the violinist Kreutzer with anything like the aesthetic distance with which even the most engaged listeners today encounter it. To him, the piece is a monstrosity, provoking passions that cannot find fulfillment, literally maddening. Without Beethoven’s music, Pozdnyshev’s marriage would remain his own personal nightmare. Add Beethoven, and it becomes an incitement to rage, to fury, and to murder. The Mind of a Murderer Driven Mad!

“Opening the company’s (Plan-B) silver anniversary season, The Kreutzer Sonata was a creative declaration of excellence. Directed by [Jerry] Rapier, it was one of the most thrilling pieces of chamber theater that could be presented in less than 50 minutes. Samuelsen’s play transformed Leo Tolstoy’s novella of the same name – a story about a man going mad who tries to rationalize murdering his wife, believing that she was having an affair with her musician friend. In collaboration with the NOVA Chamber Music Series, the play featured live excerpts from the Beethoven work of the same name, with pianist Jason Hardink and violinist Kathryn Eberle, the Utah Symphony’s associate concertmaster, performing.
Samuelsen captured the driving pace of Beethoven’s work in a theatrical setting that was stupendous at every turn. He let Pozdnyshev (performed brilliantly by actor Robert Scott Smith) explain the most candid depths of his madness while drawing the audience inward to “watch, learn and listen” in the way this tormented man might have heard the music. Only the first movement was played in its entirety and, in more than 15 other instances, Samuelsen weaved the music — sometimes no more than a bar or two of music or an extended yet brief segment of one of the sonata’s other two movements — progressively deeper into the monologue, often with Pozdnyshev speaking over the musicians’ phrases. As The Utah Review highlighted, this was music as classic mise en scène — the play’s de facto fourth character.
Samuelsen trimmed Tolstoy’s 32,000-word novella to just 3,500 words in the script: 70 percent were his own and the remaining portion came from the Russian novelist. He initially listened to a live performance of the entire work by Eberle and Hardink. As he pursued the project, he said, in classic Samuelsenesque style, “I listened to punk rock – The Clash, Sex Pistols, Ramones. It helped me get pretty close to where I wanted the play to be.” Eberle said the experience was so tremendous that future performances of the sonata would be approached with the play in mind.”

“The Kreutzer Sonata” integrates music with a chilling tale of murder.
by Catherine Reese Newton for The Salt Lake Tribune

“Forget about music’s supposed charms to soothe the savage breast. In Eric Samuelsen’s new one-act play, “The Kreutzer Sonata,” music has power to drive a man to murder.
Plan-B Theatre Company and the NOVA Chamber Music Series opened their seasons together Sunday night with a gripping performance of Samuelsen’s play, based on Leo Tolstoy’s novella of the same name. Over the course of an hour, the protagonist explains how hearing his wife play Beethoven’s Violin Sonata No. 9 (nicknamed the “Kreutzer” Sonata) with a male acquaintance drove him to murder her.
Samuelsen’s taut script, which boils Tolstoy’s novella to its essentials, seamlessly integrates the art forms of music and theater. Violinist Kathryn Eberle and pianist Jason Hardink never interact with actor Robert Scott Smith or even acknowledge his presence — for that matter, they make no more eye contact with each other than is absolutely necessary — yet their performance carries breathtaking dramatic force. Likewise, there is terrifying music in Smith’s spoken monologue, a bitter indictment of music and marriage that crescendoes until it becomes operatic in its fury.
“Listen as I listen,” the murderer challenges his audience. As we do, we begin to hear defiance in Eberle’s playing, though her face remains impassive.
Jerry Rapier’s direction, Randy Rasmussen’s minimalist set and Jesse Portillo’s lighting design match the excellence of the three performers.”

PRODUCTION PHOTOS of the Plan-B Production:

The Kreutzer Sonata
a play to music

THIS NOTICE MUST APPEAR IN ALL PROGRAMS, ON ALL POSTERS AND PUBLICITY MATERIALS AND INTERNET ADVERTISING/WEBPAGES FOR THE PLAY:
“The Kreutzer Sonata is presented through special arrangement with Leicester Bay Theatricals.  All authorized materials are also supplied by LBT, www.leicesterbaytheatricals.com”