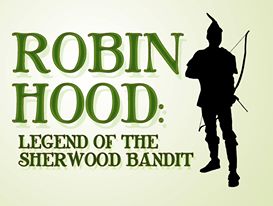 This tale of Robin Hood is told to the audience by a band of medieval troubadours, led by the character playing Alan-a-Dale, and centers on the evolution of Robin Hood from a playful noble to a selfless hero.  Instrumental in this transformation is Maid Marian, a childhood friend who expects a different type of nobility from Robin than he is initially willing to uphold.  Robin is surrounded by his traditional band including Will Scarlet, Little John, and Friar Tuck, and is opposed by Prince John, Sir Guy of Gisbourne, and the Sheriff of Nottingham.  But it takes more than just the expected characters to effect a change in Sir Robin of Locksley.  Legend of the Sherwood Bandit relies on a new character, Rowena to portray the consequences of the selfish decisions Robin could have made along the way. Martha, Little John’s wife, anchors the Sherwood bandits emotionally, and Much, the Miller’s Son, balances what could have become a darkly emotional tale with the perfect amount of comedy. The Legend of the Sherwood Bandit is timely because its themes are relevant, and it is relevant because its characters are believable.

CAST: 10M 5F (PLUS up to a dozen males and a dozen females to be additional Merry Men, foot
soldiers, court nobles/ladies, peasants, and/or one-off characters as needed. 6 women for Alan-a-Dale’s troubadours. 5 children as Little John & Martha’s brood.)

PERUSAL SCRIPT: The PDF of 1/2 of the script is available: RobinHood PERUSAL

The following is how the credits should read in all programs, posters, fliers, handbills and other promotional advertising for the show:
Robin Hood

Legend of the Sherwood Bandit

Book and Lyrics by
Ed Farnsworth

“Robin Hood: Legend of the Sherwood Bandit” is presented through special arrangement with Leicester Bay Theatricals.  All authorized materials are also supplied by LBT, www.leicesterbaytheatricals.com”