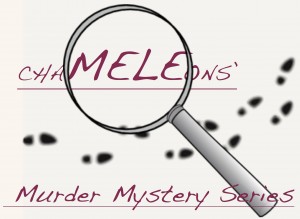 CHAMELEONS is Utah’s oldest and most successful Murder Mystery Dinner Theatre Troupe. With over 30 years behind them and thousands of performances, these scripts have been tried and tested and are ready for your theatres or touring companies.

PERUSAL SCRIPTS to each show contain HALF the script in PDF format and are downloadable, FREE of charge from this website.

A typical show will have a structure as follows:

(Perusal Scripts will be added)

CLICK ChameleonMurderMysteriesNEWLIST for a PDF file listing a brief summary and cast requirements for all of the shows.

The American Medical Assasination (a musical)

Death On Deck (Swashbuckling Piracy on the High Seas Cruise)

Fraternal Disorders (Vows taken do not end with graduation)

Ghost Writers and Ghost Riders (The train ride to…)

The Morgue, The Merrier (Forensic Toxicologists at a convention)

Murder Under the Mistletoe (Who gets crossed off Santa’s list at the yearly office party?)

Showdown at Gambler’s Gulch (A murdered mayor — a new slate is needed, but rapidly diminishing in number)

Slaughter On The Strip (The Showgirl misses her entrance) (a musical)

Space: The Fatal Frontier (Aliens invade the crew of a starship and the identity mystery begins, with deadly results)

That’s the Way the Fortune Cookie Crumbles (Espionage and a USO show — is anyone safe?) (a musical)

‘Til Death Do Us Part (the ultimate Italian Mob wedding)