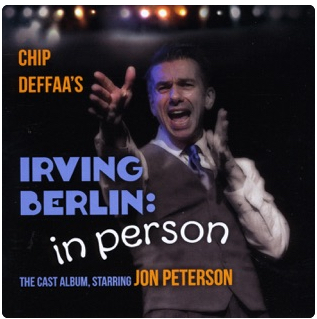 Written and Arranged by Chip Deffaa

Berlin was a small boy when his family–with little more than the clothes they were wearing–fled Russia to escape religious persecution. He never had much formal education. He never learned to read or write down music. But he gave the world songs that will live forever. This is the first–and only, as of this date–one-man show ever to be written and published about Irving Berlin. For a strong triple-threat performer, it’s a wonderful showcase. Irving Berlin was the most successful single songwriter in history. Berlin made more money and wrote more hits than any of his so-called competitors.

But, if truth be told, he was a complex man; and his life was often far from happy.  Now, for the first time, his life story is being told–forthrightly and frankly, and set to his own unforgettable music–in a vivid one-man show, featuring 40 terrific Berlin songs.

Read the review from Talkin’ Broadway:

LINK FOR THE FULL REVIEW

“You are cordially invited to meet legendary American songwriter Irving Berlin as he tells you about his life and career. The biographical show Irving Berlin: In Person with a cast of one, seen in New York City, is now represented by a recording with the dashingly entertaining and energetic actor-singer-dancer Jon Peterson as Berlin. He has the ideal support of the project’s pianist/musical director Richard Danley, with Aaron Weinstein on violin or mandolin on some tracks. What a lucky, lively experience it is, with a bounty of sparkling performances of over 30 numbers, famous and rare. Most include quick spoken set-ups that place them in historical context with tidbits of info as Berlin reminisces (and then the peppy Peterson regales us with appropriately old-school show biz pizzazz).

The project is one of several stage pieces and recordings that survey and sample the master’s massive oeuvre, all created, produced, and directed by Berlin authority and admirer Chip Deffaa, who also writes the connecting spoken material. As he typically sees fit to do, Deffaa puts much emphasis on material from the early years, with stand-alone novelties in vaudeville style, rags, dance crazes, and “character” specialties.

Even the titles suggest amusement and don’t disappoint: “I Beg Your Pardon, Dear Old Broadway,” “Bring on the Pepper,” and “I’m Gonna Pin a Medal on the Girl I Left Behind.” Some oldies interpolated into film scores are heard, but the big musical comedy book shows’ scores are not sampled. Along with such long-lasters as the writer’s first hit, “Alexander’s Ragtime Band,” and the Ziegfeld Follies theme “A Pretty Girl Is Like a Melody,” a handful of things that have become standards are heard, such as the ballads “Always” and “What’ll I Do?,” with the weeper “When I Lost You” recalling the death of Berlin’s wife shortly after they wed. Our song-and-dance star is no one-trick pony, as he is effectively sincere with these sentimental selections, too. But with brisk accompaniment reinforcing the muscularity of melodies, the razzly dazzly happiness-spreading firecracker things are especially striking and fun. They are on the short-and-sweet, efficient side. With “Do Your Duty, Doctor,” he dutifully takes on different character voices—another skill shown.

Indefatigable and a polished pro, Jon Peterson ignites everything and is immensely likable. Enthused spoken intros show mostly Berlin’s pleasures about accomplishments and performers who introduced his work, like Fanny Brice (another subject for a Deffaa’s bio-musicals), but the selected bits of the script also touch on loneliness and frustrations. No Jonny-come-lately to Mr. Deffaa’s work, the man stepping into Berlin’s shoes starred in similar star as George M. Cohan in earlier work.

Mr. Danley is a very frequent collaborator, so in touch with the period stuff, and he adds his own robust singing for a contrapuntal duet on “Play a Simple Melody.” Mr. Weinstein is a welcome returnee, too. Everything sounds vital and fully alive, never like dusted-off creaky relics as they dive into the delights. Berlinoholics and collectors who’ve been accumulating the Deffaa releases will recognize and remember more of the material, as there is considerable overlap with other projects with material sung by others, including quite young up-and-coming performers. But they get a great showcase here.

Three cheers and thank goodness that Irving Berlin’s work continues to get encores in the spotlight by caring caretakers of the legacy by the determined and devoted Chip Deffaa. How fortunate the music lover who joins him in making exploring the past a rewarding pastime—time and time again.”