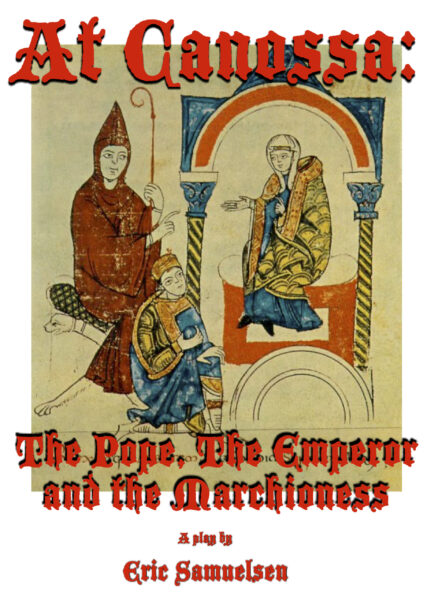 It is 1077. The Holy Roman Emperor, The Pope, the Abbot of Cluny, and the Marchioness of Tuscany. A schism presents itself, the fracture of a Church that may be even greater than the one with Byzantium. Will there be war? Will it further divide the Kingdom of God and the region of Europe? Does the contrition of an Emperor mean that The Holy Roman Empire will endure, even through bribes, scandal, celibacy, crusades? Who will prevail: German, Roman, Tuscan, Swabian, Englander, Norman, Aragonese, Catalan, Provencal? This crossroads of history may have been the first sexual revolution — in minutiae — the beginnings behind the Crusades, the results of William conquering Anglo-Saxon England, and the foment of the roar of a Church heard around the world. A Marchioness fights to have a choice in marriage. An Emperor longs to have control over an empire. An Abbot strives to keep the Church (and its followers) pure through celibacy. And Pope Gregory tries to balance the things of God where balance may not be possible.

This is a hard hitting, adult play with themes and language meant for mature audiences.

As of the current date, the WORLD PREMIERE  rights are available for producers interested in PREMIERING this new musical.

At Canossa: The Pope, The Emperor, and the Marchioness
A New Play

THIS NOTICE MUST APPEAR IN ALL PROGRAMS, ON ALL POSTERS AND PUBLICITY MATERIALS AND INTERNET ADVERTISING/WEBPAGES FOR THE PLAY:
“At Canossa: The Pope, The Emperor, and the Marchioness is presented through special arrangement with Leicester Bay Theatricals.  All authorized materials are also supplied by LBT, www.leicesterbaytheatricals.com”