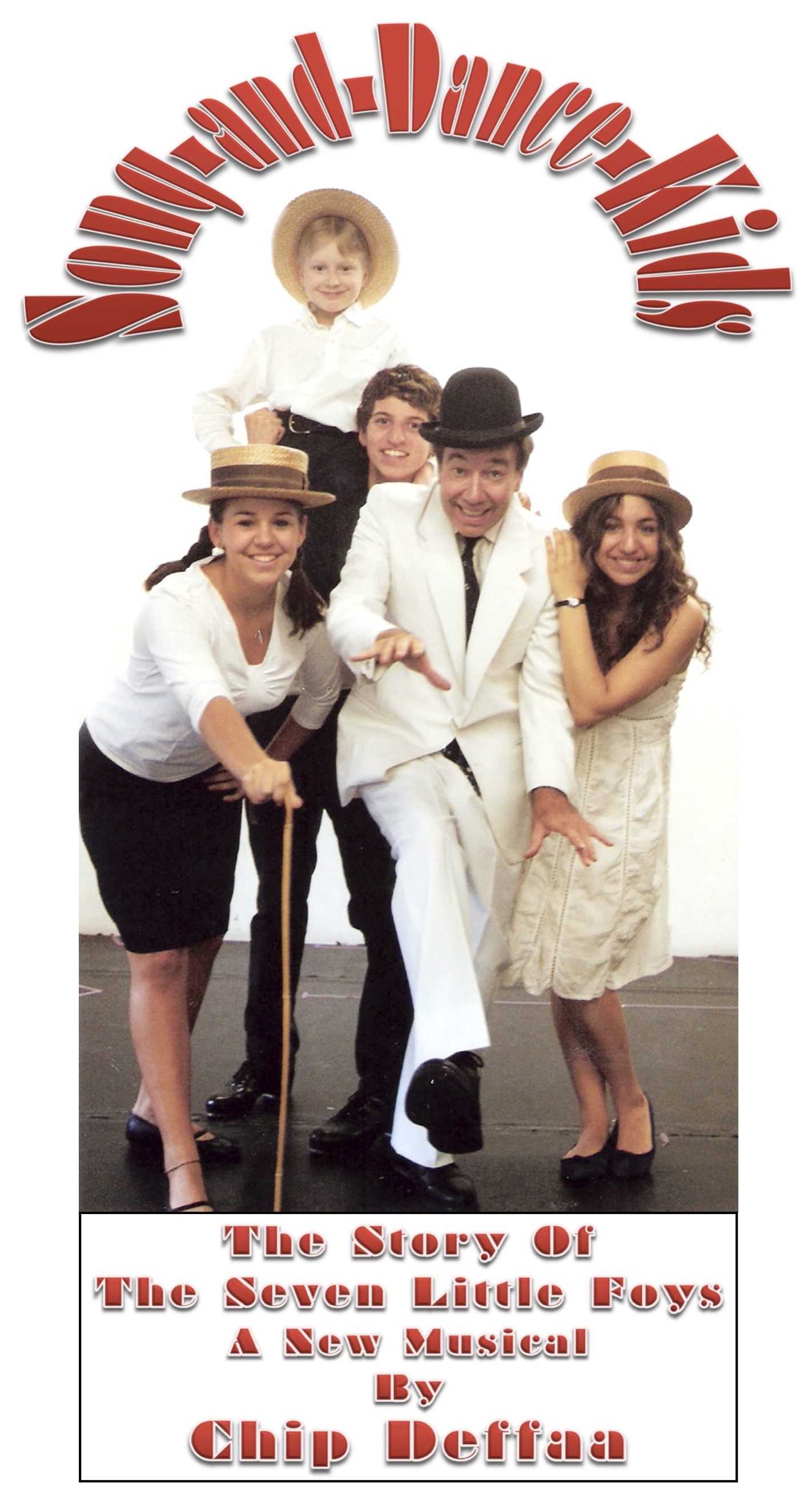 If you’re looking for a big, exuberant, full-length musical comedy with roles for lots of actors, look no further! The warm, witty, and nostalgic “SONG-AND-DANCE KIDS: The Story of the Seven Little Foys” includes such colorful, historical characters as Harry Houdini, Marie Dressler, Irving Berlin, President Woodrow Wilson, and Mae West. The real stars of this musical, though, are seven rambunctious “song-and-dance kids” of the Eddie Foy Family.
This is the story of a real-life master song-and-dance man who wound up leading the most successful family act in vaudeville by taking his seven irrepressible children out with him “on the road” after their mother died. Defying the odds, Eddie Foy and the Seven Little Foys became an American institution. He’d never really thought he was cut out to be a father. His kids had certainly never thought they were cut out to be entertainers. But in the tough times, touring together, the kids–and their father–came to fully understand the importance of family. With lots of heart and plenty of humor, its vaudeville era setting does not isolate it as it certainly speaks to us today. For it’s the story of a single parent–a widower–trying to hold his family together, teaching his kids the only trade he knows. His trade just happens to be singing-and-dancing. The kids, at first, don’t want to go along with him. But the father knows it’s the only way to keep the family together. As the family troupes across America–entertaining folks from Waterbury, Connecticut to LaVergne, Tennessee, to Los Angeles, California–they’re also learning what’s really important in life.
Their story inspired a hit motion picture (starring Bob Hope), as well as a later TV special (starring Eddie Foy Jr. and the Osmonds).

ASCAP Award-winning writer Chip Deffaa created the first stage musical about the family, the small cast “The Seven Little Foys.” (Also available from Leicester Bay Theatricals) That show and its cast album received rave reviews. That show was written for 10 actors–and for many theaters, that’s an excellent cast size.

But some theaters and schools want shows with bigger casts. When some community theaters told Deffaa they liked the story about a family of performers, but would prefer a show that more actors could participate in, Deffaa wrote “Song-and-Dance Kids.” It can be performed by anywhere from 20 players (with some “doubling” of roles”) to 40 or more players.
This valentine to vaudeville provides a look into a fabulous era of entertainment. The score of this musical includes such enduringly popular songs as “In the Good Old Summertime,” “Play a Simple Melody,” “So Long, Mary,” “All By Myself,” “Aba Daba Honeymoon,” “Under the Bamboo Tree,” “Alexander’s Ragtime Band,” and “Till We Meet Again”–plus some originals by Deffaa, and some very rare Foy-family special material found nowhere else. (“Stories Adam told to Eve”)

Available for all production groups NOW!

DEMO SAMPLES These cuts are non-vocal and are taken from the Finale files of the Piano-Vocal Score with the melody being played. These are only 4 of the 39 songs in the show:

THIS NOTICE MUST APPEAR IN ALL PROGRAMS, ON ALL POSTERS AND PUBLICITY MATERIALS AND INTERNET ADVERTISING/WEBPAGES FOR THE PLAY:
“Song-and-Dance Kids is presented through special arrangement with Leicester Bay Theatricals.  All authorized materials are also supplied by LBT, www.leicesterbaytheatricals.com”