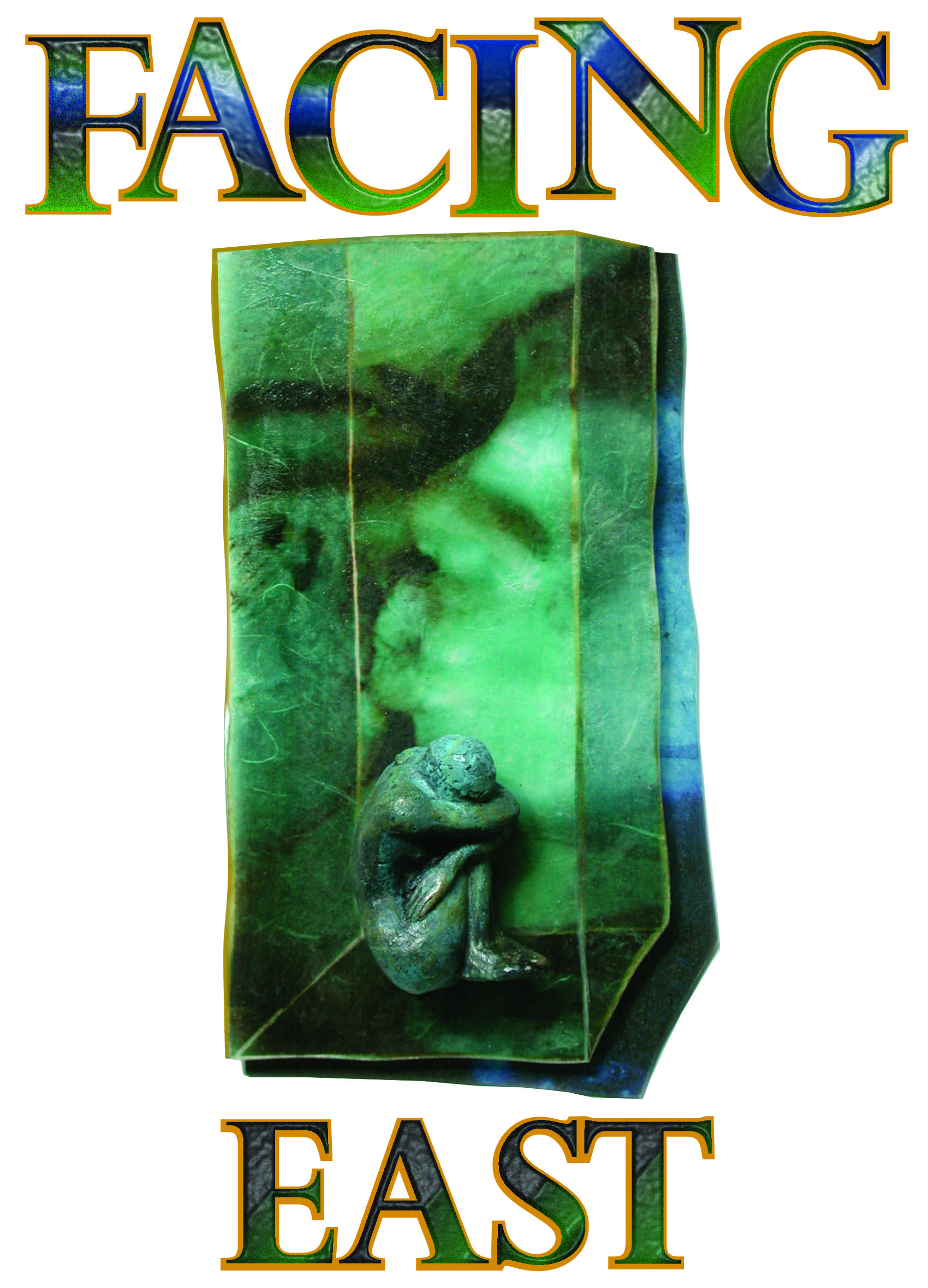 The story deals with a Mormon couple confronting the suicide of their gay son. The problems inherent in dealing with this emotional and idealogical divide are universal to all humans, let alone any particular religious group.

The three characters—father (Alex), mother (Ruth) and gay partner of the deceased (Marcus) — meet for the first time at Andrew’s grave following the funeral. The audience “becomes” the congregation in a new funeral the father is giving for his son, this time a funeral that speaks the truth. There are “memory moments” in which each parent relives important times in the past, during which the other parent speaks the son’s lines from the darkness. The only time we “see” the deceased son is toward the end when his partner “becomes” him in memory. These stylistic devices make us yearn to actually see and hear Andrew, but we cannot. Neither did most of us truly see or hear him when he was alive.

“[Facing East] resembles the last scenes of a Greek tragedy, a vivid rumination on grief, regret and shame. Rather than advancing any one perspective as correct, Pearson crafts all her characters with sympathy. Her insightful writing proves that well-meaning love guides Alex’s anger just as much as Ruth’s insistence that she’s honoring her son by refusing to accept his sexuality. [There is] near-sacred stillness and elegance in this lament for a civil war.” —Variety

“Some theatre is good drama. Some drama is important theatre. Facing East is both.”  —nytheatre.com

“This compact, emotional epic doesn’t bear even the slightest trace of exploitation: only truth, simply and beautifully told.” — talkingbroadway.com

“A fantastic new play, a raw, human portrait of a conflicted life that has been wasted at the hand of faith-based bigotry with just enough levity to keep the piece from completely breaking your heart, and just enough hopefulness to leave you with the idea that we may actually learn from our mistakes.” — goodasyou.org

“In one of the most hypnotic, rewarding, emotionally moving works of the year, Carol Lynn Pearson delivers an unforgettable tale about children and parents, and lovers and loved ones.” — Good Times Weekly, Santa Cruz

“Facing East is a sad play, one of the saddest I’ve seen in a long, long time. And in that sadness, it thrives. There is a significant dramatic difference between the sad and the maudlin, the latter of which Facing East avoids to a surprising degree.”  —Bay Area Reporter

“Poignant, disturbing and memorable, Facing East packs an enormous punch and tells a story that resonates far beyond its roots. While it deals with the Mormon Church and homosexuality, the core message of the show is much more universal. Fortunately, from a theatrical standpoint, Pearson is much more interested in telling an engaging story in a compelling fashion than preaching. The play is beautifully written and paced so the whole situation is revealed in a series of small surprises.” — Contra Costa Times

“May well be the best thing Carol Lynn Pearson has ever written…[in her] eloquent, tightly written script…there is very little finger-pointing, but plenty of fodder for healthy debate.” –Deseret Morning News

“The theatre was packed with so much emotion….  Every one there, I’m sure, had a story–of pain, of betrayal, of confusion, of sacrifice and the struggle for love.  They were looking to find redemption, hope, and searing honesty, no matter what the cost.  Thank you for holding nothing back.  You never let up, except for an occasional gift of humor so we could breath. There was a shared compassion that held us in a place beyond words.  It was an amazing experience to be part of.”  — Jan

“Thank you, Carol Lynn Pearson, for reminding us that the task of any religion is to teach us whom were required to love, not whom we’re entitled to hate.”  — Rabbi Harold Kushner, author of When Bad Things Happen to Good People

FROM AROUND THE COUNTRY

“I  directed this amazing play about 4 or 5 years ago. It is an amazing and powerful play!” — Fuzz Roark, Spotlighter’s Theatre, Baltimore MD

“…we produced it in 2010 to great acclaim. It is a wonderful, heartfelt and intensely moving!” — Philip Crosby, Executive Director, Richmond Triangle Players, Richmond Virginia

(Any PDF purchased will be emailed to your email address — if you need to provide that to us (not the one on your PayPal account?), email us. CDs will be mailed to a snail mail address. Before we ship any rehearsal material we will need your performance dates, the name of your organization and the theatre where you will perform.

The following is how the credits should read in all programs, posters, fliers, handbills and other promotional advertising for the show:
Facing East

a drama by
Carol Lynn Pearson

THIS NOTICE MUST APPEAR IN ALL PROGRAMS, ON ALL POSTERS AND PUBLICITY MATERIALS AND INTERNET ADVERTISING/WEBPAGES FOR THE PLAY:
“Facing East is presented through special arrangement with Leicester Bay Theatricals.  All authorized materials are also supplied by LBT, www.leicesterbaytheatricals.com”