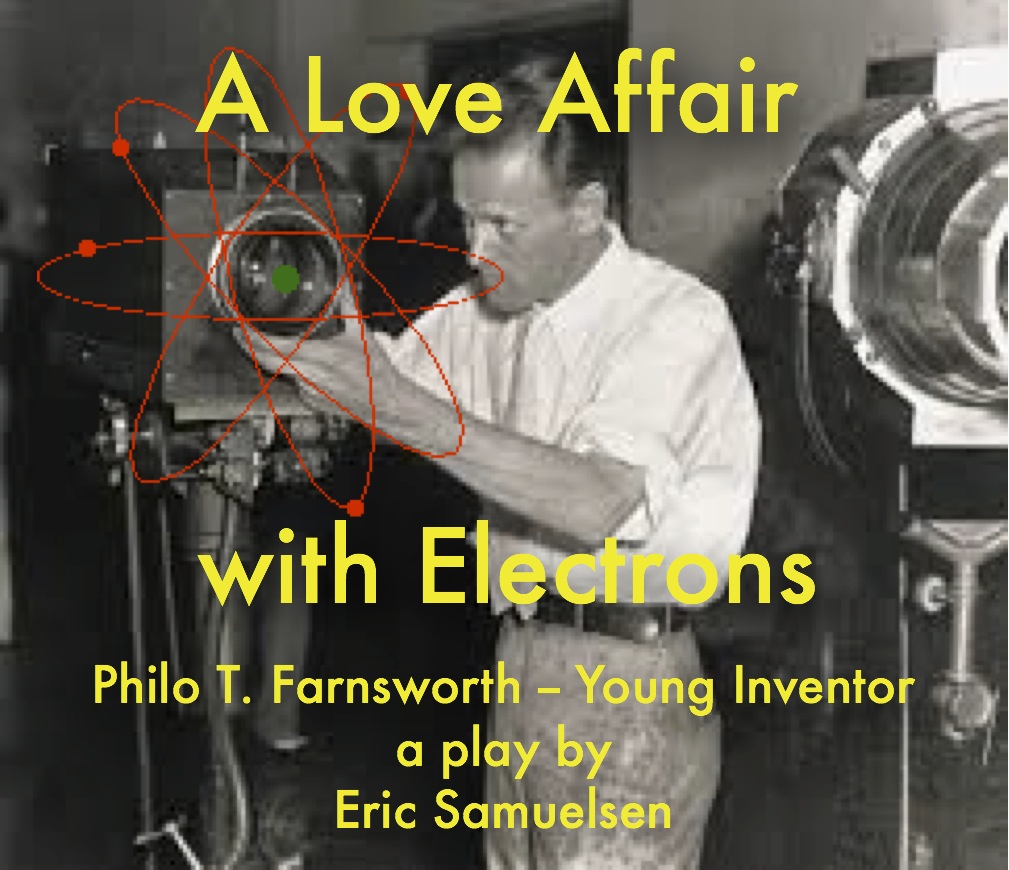 a play about the Inventor of Electronic Television by Eric Samuelsen

The torturous route from 14-year-old Utah genius to recognized creator of the medium that revolutionized the world. The battles with RCA, Westinghouse, and GE to maintain the patents clearly held by Philo; the love affair that became a marriage to his wife; and the love affair they both had with Television. In this production, many of the scenes are done as a parody of contemporary television, which adds another level to this thoughtful script (including innocuous TV jingles).

“A Love Affair With Electrons,” like the medium of television, is an entertaining mix of truth, history and fiction. It also takes an unusual storytelling approach, moving from the stage to the screen and back again through the camera, taking the audience along for a nice ride that’s mostly just plain fun.
That’s not to say there isn’t some serious education involved. No one could attend this production without gaining a new understanding and appreciation for Philo T. Farnsworth’s brilliance, dedication, heartbreak and tireless effort at inventing the electronic television.
It’s nice to see Farnsworth defined as a Rigby, Idaho, boy, by the way, a fact sometimes misconstrued or not admitted by Utahns.
Eric Samuelson has done an admirable job with this original script. He weaves historical fact into the story without allowing it to become a class lecture.
The production is lively and fresh, and there’s really no way to predict what will happen next.
The dialogue moves fairly briskly, and the images are interesting as the onstage action is picked up and put on the big screen as well as onto a series of smaller screens that make up most of the set structure.”

‘Love Affair with Electrons’ a witty play about TV

“Philo T. Farnsworth. Idaho farm boy and one of the inventors of television. Modern society possibly owes more to this man than any other scientist of the twentieth century, and yet his efforts to create electronic television have been relatively unknown…a highly enjoyable original play that presents the history of Farnsworth’s struggle to realize his vision of electronic TV…employs a unique format to tell Farnsworth’s history, as well as critique what television has become…Dotting the stage were seven televisions, one projection screen and two cameramen who recorded the entire play. Different parts of the story were told in the styles of various television program genres and the entire action was shown on the screens.
“Commercials” shown between acts emphasized the commercialization of the medium…humorous, thoughtful and thought provoking. If you have any affection for television, you need to see this play.”

A Love Affair With Electrons
A New Play

THIS NOTICE MUST APPEAR IN ALL PROGRAMS, ON ALL POSTERS AND PUBLICITY MATERIALS AND INTERNET ADVERTISING/WEBPAGES FOR THE PLAY:
“A Love Affair with Electrons is presented through special arrangement with Leicester Bay Theatricals.  All authorized materials are also supplied by LBT, www.leicesterbaytheatricals.com”