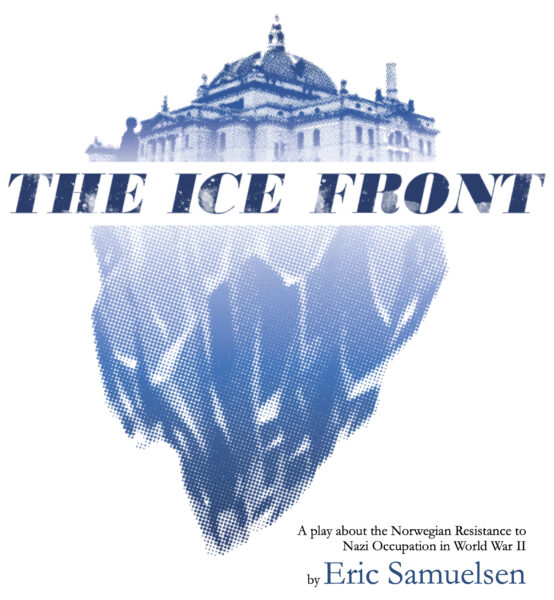 It takes courage to pretend to be someone you are not in order to be who you are.

The traitorous takeover of Norway by the Nazis during WW2 was not well received by the vast majority of the Norwegians; especially the acting community. The actors of the Norwegian National Theatre find themselves in an uneasy truce with Nazi cultural authorities during the German occupation. Distrust rises to defiance when they are forced to perform a Nazi propaganda piece, conscience comes face-to-face with The Final Solution. Several of the actors were murdered. The remainder were either imprisoned, or forced to flee to neutral Sweden, where they waited out the war. After the war, laws were changed in Norway to allow the execution of traitors. Those responsible for the invasion and the betrayals paid with their lives. THE ICE FRONT honors the heroism of and dangers faced by the trilogy of Nazi victims – Jews, Roma, and Homosexuals – by questioning what it means to be an artist, to be a patriot, to be human. The script includes a pronunciation guide.

COMMENT in retrospect by Les Roka for Salt Lake Magazine

“In 2017, The Ice Front again raised the bar for Plan-B. It featured the largest cast ever (nine actors) and was among the longest plays in the company’s history. And, it sold out its entire production run more than a week before its scheduled opening.
It is a masterful synthesis of all of the most significant traces that encompassed Samuelsen’s work and his life. The Ice Front takes audiences back to Nazi-occupied Norway in 1943 and to the precise moral dilemma confronting the members of the Norwegian National Theatre in Oslo. The actors contemplate the prospects of sabotaging a production in which they would have to submit as performers and agents of propaganda.
In one scene, Peter (played by Daniel Beecher), a character who normally plays leading man roles, says, “We could act badly on purpose. We could sabotage the play, and limit its propaganda value to the degree that we can. That’s risky, very dangerous. We very well could be killed. But it remains a possibility.” Still trying to sort out why the authorities insist on making the play happen, Birgit (performed by Stephanie Howell) worries about becoming a “victim of circumstance,” adding, “I don’t want events to control us; I’m a stage manager. We want to make things happen.” Eventually, the actors vote 4-1 in proceeding but by following the tenth and most consequential commandment of the Resistance: “If you absolutely must work for Germans or quislings, you will work badly.”

The idea of writing the play that became The Ice Front was more than 30 years in the making, based on research he discovered as he wrote his dissertation. However, Samuelsen had become fully absorbed with his life as a playwright, scholar and university professor so the project always lingered in the background. But, his father, Roy Samuelsen, who died in 2017 and to whom The Ice Front is dedicated, never gave up on encouraging his son to bring this play forward to completion and production. Samuelsen’s grandfather knew first-hand the moral significance and strategic value of The Ice Front rules and the brave risks many took, acknowledging that Resistance was the only morally correct thing to do. His uncle was a war hero who received among the highest honors of the Norwegian military. But, some of those courageous men and women involved in the Resistance paid a deep price in terms of their physiological and cognitive well-being, as anger, alcoholism and untreated Post-Traumatic Stress Disorder would disrupt and consume their lives long after the war ended.
Samuelsen was at the height of his intellectual and creative powers, even as his body struggled to cope with numerous health crises and long hospitalizations. The humanistic challenges in The Ice Front are as formidable, incisive and existential as they were in Nothing Personal. However, the 2017 audience also was better prepared emotionally than the 2013 audience to heed the warning signs of history – the virulent expressions of intolerance, hatred, discrimination and bigotry that currently cause great distress in our nation.
As previously highlighted at The Utah Review, Samuelsen deftly excavated stories about ordinary individuals – the actors and professionals in a national theater in Oslo, for example – who variously fall along points on the spectrum between the protagonist victim and the antagonist villain. Again, as Birgit mentions, “I don’t like this, being a victim of circumstance.” In The Ice Front, Birgit and the other characters vividly demonstrate what it must have been like for ordinary Norwegians to endure that period of history. Late in the play, they begin to comprehend the dynamics of history’s critical judgment and the hope that they will be forgiven. The contemporary parallels are unmistakable. The formula for Samuelsen drama’s contemporary relevance always will be urgent, wise, sensitive, intelligent and spiritual.”

From “The Utah Review” (excerpts)

“It is a magnificently acted sequence in a production that will be one of the most memorable in Plan-B’s history. The Ice Front, directed with such astute recognition of historical integrity by Jerry Rapier, is one of those rare clarifying gems of theater that moves backward into under-explored territory of a widely studied historical period to gain a better understanding of how the world experienced the genocide which was the Holocaust. How could we fathom the idea of ordinary individuals allowing such events to occur? How could they ever live with their conscience after the fact?”

“Samuelsen’s The Ice Front compels us to learn from the experience of ordinary Norwegians and to be clear minded, keen and vigilant as ever. We should interrogate our own narratives along with our command and understanding of historical facts against the expressions of intolerance, hatred, discrimination and bigotry that always are the most accurate warning signs in history. In writing The Ice Front, Samuelsen meticulously has cross-examined his own narratives and facts, which came from the wartime experiences of his family, his research for his dissertation on Norwegian theater and his own lifetime work with the inner workings and culture of the theatrical world. He infuses the play with historical accuracy and integrity but never allows it to overwhelm the essential emotional tensions of drama that maximize the value of a three-dimensional understanding of human conscience and the choices we face. He strikes a solid, credible balance for the right thematic purpose.
It is Samuelsen’s never-wavering ring of authenticity that drives the momentum of The Ice Front, which features the largest cast ever (nine actors) and among the longest plays in Plan-B’s 27-year history. The opening night performance already was taut and crisp in its pacing.”

“Plan-B’s production interprets exquisitely Samuelsen’s sensitive, intelligent, wise appeal for the vigilance we need to confront our most painful histories. Its contemporary relevance always will be urgent.”

In the “Play within the Play” in “The Ice Front” the theatre company is producing Ludvig Holberg’s, “Jeppe of the Hill”, a new version of which is available from Leicester Bay Theatricals, adapted and translated by Jerry Argetsinger.

The Ice Front
a play about the Norwegian Resistance to the

THIS NOTICE MUST APPEAR IN ALL PROGRAMS, ON ALL POSTERS AND PUBLICITY MATERIALS AND INTERNET ADVERTISING/WEBPAGES FOR THE PLAY:
“The Ice Front is presented through special arrangement with Leicester Bay Theatricals.  All authorized materials are also supplied by LBT, www.leicesterbaytheatricals.com”