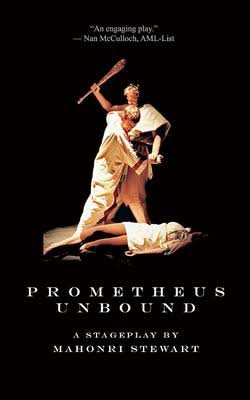 Phoebe faithfully serves at the temple of Delphi. There, she has a vision of the Titan Prometheus, the advocate of humankind who gave us fire. As punishment for helping the humans, Zeus chained Prometheus to a rock and it is there that Prometheus is tortured daily. Prometheus calls Phoebe to free him, so she must gather a group of heroes for the task. Yet, doubt and opposition plague her from the start as she wonders whether she is now afflicted with madness, or whether she truly did receive a vision from a tortured, but loving god.

“Stewart has written an engaging play and made it more accessible than the Greek plays of my childhood.” — Nan McCulloch, AML-List

“I particularly enjoyed the feminist aspects of the story, both implicit (four of six characters who go on a quest to rescue Prometheus are female) and explicit (the goddess Artemis explains that Pandora being duped into releasing evil into the world had nothing to do with her gender [which is, of course, a metaphorical defense of Eve]).”— Ben Christensen, Front Row Reviewers

“Stewart has done an excellent job weaving together Greek myths into an absorbing Hero’s Quest… each character is given Stewart’s full attention… The dialogue is a perfect tone… It is also wonderfully witty, with tasteful comic relief to counterbalance the numerous serious themes.”— Sarah-Lucy Hill, My Brave New World

THIS NOTICE MUST APPEAR IN ALL PROGRAMS, ON ALL POSTERS AND PUBLICITY MATERIALS AND INTERNET ADVERTISING/WEBPAGES FOR THE PLAY:
“PROMETHEUS UNBOUND is presented through special arrangement with Leicester Bay Theatricals.  All authorized materials are also supplied by LBT, www.leicesterbaytheatricals.com”