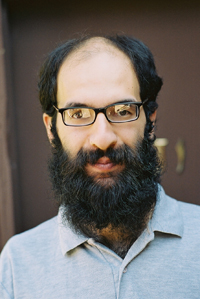 If he’d lived a long time ago, when all literature was religious, he might have been famous. (Or else executed for heresy. Hard to say.) But the world has changed and thank goodness James Goldberg missed the memo, because it’s nice to have a few literary religious writers still around, asking us to see our sacred stories in new and different ways.

Goldberg’s first public confession of commitment to the cause of Mormon Literature was in 2006, when he read the essay “Toward a Mormon Renaissance” at the New Play Project’s first set of overtly religious plays. As a co-founder and Artistic Director of the communal theater company, he explored religious themes with live audiences and a broad group of collaborators including Melissa Leilani Larson, Arisael Rivera, Bianca Dillard, and Katherine Gee for the next three years. Goldberg’s Sikh-style, Biblical-length beard became an icon in those days, widely recognized for the mix of religious devotion, collective consciousness, and revolutionary zeal it represented. Goldberg’s play Prodigal Son won the Association for Mormon Letters Drama Award in 2008.

After falling asleep in the adult session of stake conference one fateful day in that same year, Goldberg awoke feeling inspired to go back to school, studying creative nonfiction instead of theater. As an MFA student at Brigham Young University, he purchased health insurance just in time for his first cancer diagnosis at age 26. In grad school, he also somehow landed a research assistant gig with the Joseph Smith Papers Project and succeeded at scandalizing much of the English Department faculty by proposing a creative thesis project consisting primarily of three blogs: a religious one called Mormon Midrashim, an ethnic one called Caucajewmexdian, and a semi-fictional one called My Life and Hard Times. Before graduating, he also collected his insights into a nominally thesis-compliant document entitled Drink Me, or: How I Learned to Stop Worrying and Love the Blog.

Shortly after graduating, Goldberg co-founded the Mormon Lit Blitz with Scott Hales and Nicole Wilkes Goldberg. The contest immediately established a reputation as the world’s premier contest for Mormon microliterature, and soon made “Goldberg” a household name (if only in the homes of a smatter of talented Mormon writers). Around the same time, Goldberg fell into the text of the Bible and emerged several months later with the first draft of a lyrical novelization of the gospels, The Five Books of Jesus. After attending Orson Scott Card’s Literary Boot Camp in the summer of 2012, Goldberg finished revisions on the novel, which went on to win that year’s Association for Mormon Letters Novel Award.

In 2013, Goldberg began riding a train north along the banks of the Jordan river each day, eventually producing his first poetry collection, Let Me Drown with Moses, as a result. After another, much more intensive round of cancer and the correspondingly hellish treatments in 2015-2016, Goldberg released a second poetry collection, Phoenix Song.

At the time of this writing, Goldberg continues to maintain an existence on the border of observable reality and whatever waits just beyond what the eyes can see.

Just a few generations ago, James Goldberg’s ancestors were living in Mexico, India, Romania, California, and Utah. In the early 1900s, they began crossing oceans, breaking traditions, and even bending the occasional law to produce the people–and unique culture–that eventually produced him.

Now James Goldberg lives in a house that flies a tattered Batman flag with his wife and editor, Nicole Wilkes Goldberg, four children who see the world a little slant, and whoever else happens to be passing through. Since 2006, he’s been an active participant in the Mormon literary community.