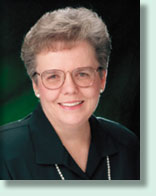 Janice Kapp Perry was born in Ogden, Utah, raised in Vale, Oregon, and makes her home in Provo, Utah, with husband of 44 years, Douglas Perry. Currently Doug and Janice are serving an 18-month proselyting mission in the Santiago Chile West Mission (will return home in November 2003). They have five children and 13 grandchildren. Through the years they have also had many foster children. Janice received her musical training at Brigham Young University in Provo and has been writing and recording gospel music for the last 27 years. She composed the hymn “As Sisters in Zion” for the LDS hymnbook and has ten songs in the Primary songbook. She served as Relief Society President in her Provo ward for 7 years, and retired in 2000 from singing with the Mormon Tabernacle Choir. She has produced more than 50 albums of original music, numerous sacred cantatas, several full-length musicals, and her music is known world-wide throughout the Church. In the ten years previous to leaving on their mission, Janice and Doug traveled extensively giving firesides and women’s conferences around the United States. Her music has been performed by artists such as Gladys Knight, Brooks & Dunn, and The Osmonds-Second Generation. She recently has written and published three volumes of new sacred hymns with a variety of hymntext writers, as well as a book telling the stories behind her songs.