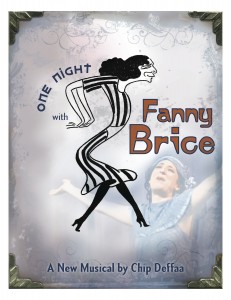 Script and all Musical Arrangements by Chip Deffaa

Fanny Brice worked her way up from singing on street corners for pennies as a kid, to burlesque, to Broadway… to becoming America’s highest-paid singing comedienne. She fell for a dashing confidence man, Nicky Arnstein–and when she introduced her immortal “My Man,” the whole country knew she was singing about him.
There’s no better showcase to be found anywhere for a strong triple-threat actress than ONE NIGHT WITH FANNY BRICE. The score mixes fierce torch songs (like “My Man,” “After You’ve Gone,” “Baby Won’t You Please Come Home”) with irresistible comedy numbers (“Second-Hand Rose,” “Oh, How I Hate that Fellow Nathan”), ragtime (“That Mysterious Rag”) and vintage pop (“Lovie Joe,” “Rose of Washington Square”). The actress gets to sing, to dance; to go from laughs to pathos, triumphs to heartbreaks… and back again.
Everyone loves a good rags-to-riches story.
ASCAP award-winner Chip Deffaa’s dynamic one-woman show, ONE NIGHT WITH FANNY BRICE has received rave reviews everywhere. Brice’s story had previously inspired the musical “Funny Girl.” And Defaa’s own THE FANNY BRICE STORY (a large cast musical for Community and Educational theatre performers)

There is some small about of language in the script, but the author has provided a way to edit it out if the theatre company prefers.

Available for all production groups!

In The Following Categories:

Congratulations to all! Now on to the New England Regional Play Festival on March 9, 2019!

As The New York Times noted in its glowing review of ONE NIGHT WITH FANNY BRICE “‘Funny Girl’ was a whitewash. ‘One Night…’ delves deeper into her story.”

The Sun Gazette Newspapers raved: “ONE NIGHT WITH FANNY BRICE delivers what it promises…. This may be as close as devotees will ever get to Fanny Brice.”

And Joe Franklin—Bloomberg Radio–called the show “Fresh and impressive! A true Golden-Age-of-Show-Business love story. The audience was exhilarated! A personal triumph for author Chip Deffaa…”

An interesting note concerning the song, ROSE OF WASHINGTON SQUARE, is that the song was written about Rose O’Neill, a beautiful, fabulous and wealthy eccentric who created, among other things, the Kewpie Doll. We have a musical about the story of Rose’s life HERE.

You can purchase the Original Cast Recordings below, or on their own pages:

Deffaa has also written a colorful full-scale musical, THE FANNY BRICE STORY which has more than two dozen characters; it can be performed by anywhere from 15 players (with some “doubling”) to 40 or more players. That show, too, is published and licensed by Leicester Bay Theatricals. CLICK HERE to view THE FANNY BRICE STORY.

One Night With FANNY BRICE
A Solo Musical

Written and Arranged by
Chip Deffaa

With songs from the repertoire of Fanny Brice

THIS NOTICE MUST APPEAR IN ALL PROGRAMS, ON ALL POSTERS AND PUBLICITY MATERIALS AND INTERNET ADVERTISING/WEBPAGES FOR THE PLAY:
“One Night With Fanny Brice is presented through special arrangement with Leicester Bay Theatricals.  All authorized materials are also supplied by LBT, www.leicesterbaytheatricals.com”