Dr. Charles W. Whitman — was born in Montpelier, Bear Lake County, Idaho. He has lived in Dodge City; Mexico, Missouri; Cairo, Illinois; and St. Louis, Missouri; Provo, Utah; and Lake Tahoe, California. He was schooled in a one-room schoolhouse, and had a fabulous couple of teachers during that period of time. He loved school. After graduating high school in 1951, he enlisted in the Air Force for a three year term, and was stationed at Fontainebleau, near Paris, France. After returning, he was accepted to Columbia University, but did not attend due to the lack of funds in the GI Bill. He chose Brigham Young University majoring in languages. He took an acting class from Harold I. Hansen and was hooked. He switched majors to Speech and Dramatic Arts. He took a part in any way in every play he could. He received his Bachelor’s in 1957 and his Masters in 1958. He was hired as an apprentice at the Cleveland Playhouse. After that, he was part of the first year’s company at the Dallas Center Theatre. He married Dorothy Whitaker, at BYU in costume design, proposing to her over the phone. She told him to write her a letter. Well, then I was accepted at the Oregon Shakespeare Festival. We got married after the summer run. Then a second summer at OSF. Underpaid, as most actors, he looked toward teaching and acquired a position teaching English, Spanish and Drama at Beaver High School in Utah. He then received his Doctorate in Drama at the University of Minnesota, where he began teaching and directing and adapting stories for plays. After graduation he taught at Chico State College for a year before being hired at BYU in 1965. Soon he started the High School Summer Workshop (which he ran for 25 years, and where EMT was written). His plays include: Speaking Tenderly of Kings, Montpelier Farewell, Play The Drum So It Is Heard Again, Tena (a musical version of the popular novel “Papa Married a Moron”), and, among others, an adaptation of Chekhov’s Uncle Vanya. Dr. Whitman was a teacher, actor, director, playwright, friend, and mentor to hundreds of young theatre hopefuls now working in the theater.

“Fires of the Mind” by Robert Elliott

These are just two of the many original plays and musicals brought to a premiere production by Dr. Whitman. 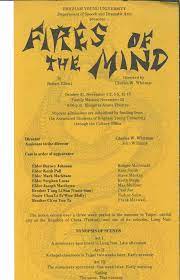 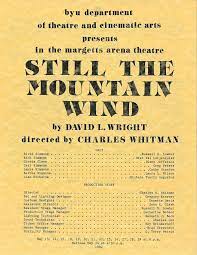