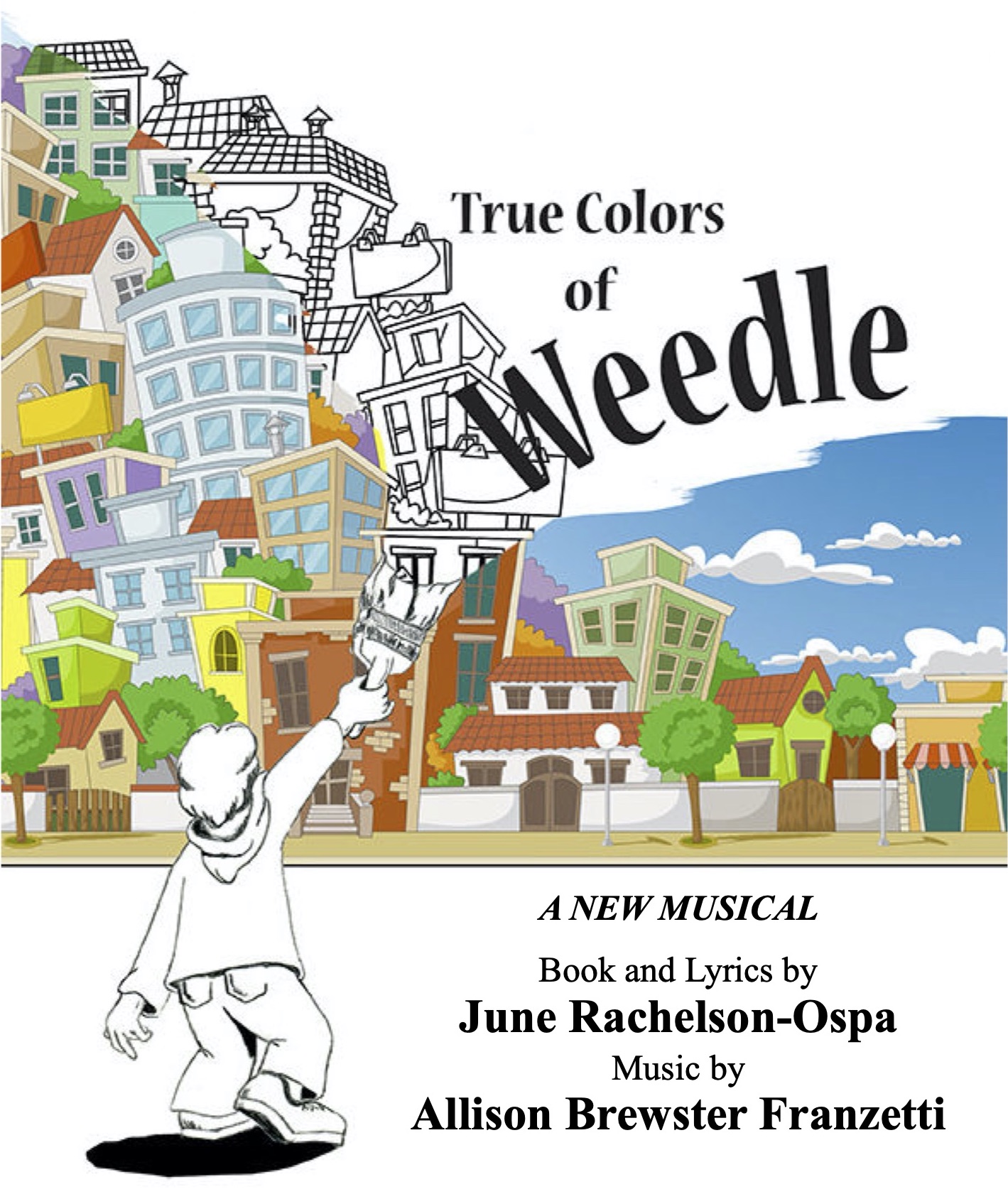 Book and Lyrics by June Rachelson-Ospa

The True Colors of Weedle is about a boy born without any color in a faraway land full of kaleidoscope colors.

The True Colors of Weedle is a fun musical about a boy, born colorless. As such, he has been bullied, because everyone else around him has lots of colors. Ostracized, Weedle sets out to find a companion/soul-mate, Marvello Maxumo Marmaduke (who ends up having three heads) after he receives a sympathetic letter from him. Like Weedle, Marmaduke has been forced into seclusion by the Falafarinians of Falifarinum, so together they hatch a plan for revenge on those who hurt have them. Weedle then must decide if he will take revenge on those who have wronged him, or if he will live his life in peace. After choosing to take revenge, Weedle feels so bad that he cries. Then, to everyone’s amazement, his tears are full of vibrant colors, proving that he had it within himself all the time… Bullying has become an epidemic, causing many children pain. Our story confronts this issue in a fun-filled way, without shying away from the issue at hand. Perhaps, this show is needed now more than ever! It is the hope of the authors that the producers will utilize actors of all genders, abilities/disabilities, and special needs, aiming to entertain and teach an important life lesson to kids: that anything is possible with the right outlook. Teaching children and families to accept people for who they are, no matter what they look like… is vital, especially when the outcome includes forgiveness.

“The most moving theatrical experience of all came at Cooke Center Academy on Macdougal Street in a basement room.

THE TRUE COLORS OF WEEDLE, the children’s musical with book and lyrics by June Rachelson-Ospa and music by Allison Brewster-Franzetti, was staged for the benefit of dozens of students with autism, Down syndrome or other special needs. Weedle Watkins is a lad who was born without any color at all; he’s “Mr. Invisible” and “Mr. Nobody” to his peers.

He endures constant bullying – “Leave me alone! All of you!” – which makes him woefully wonder “How did this happen to me? Why was I born like this? Why is everyone so mean to me just because I’m different?” Some head-bobs of acknowledgment came from the young audience members. Others leaned closer when Weedle asked himself “How can I get even with such mean people?” Indeed, Weedle got revenge – only to find it sour solace indeed.

The studied faces in the crowd were surprised to learn that retaliation wasn’t the answer.
But THE TRUE COLORS OF WEEDLE didn’t turn out to be just a polemic. There was much fun on hand, proved by the giggles the kids gave out – especially when a character got scared by the sudden appearance of an unexpected visitor.

A makeshift caterpillar costume was greeted with enthusiasm by kids who immediately filled in the blanks that the costume didn’t bother to include. And how smart of Rachelson-Ospa to include this creature which could morph into a beautiful butterfly and deliver the message “I told you that there was something beautiful inside me.” Weedle learned that “the colors were inside you all along” and that “there’s a place for everybody where all God’s children live in peace and harmony.” Was every spectator engaged? Of course not. Some stayed in their own little worlds and barely looked at the stage. And yet, when a character sneezed, a few kids were quick to say “Bless you!” The majority of kids paid rapt attention and joyfully joined in when told to “Clap your hands!” Some even sang along with the third A-section of a song after having heard the first two. What a nice compliment to Brewster-Franzetti!

One boy was so moved by what was happening that he just had to jump on stage and be part of it. And while a teacher rightfully but gently guided him back to his seat, here’s hoping this won’t be the lad’s last on-stage appearance — Peter Filichia

Book and Lyrics by June Rachelson-Ospa

THIS NOTICE MUST APPEAR IN ALL PROGRAMS, ON ALL POSTERS AND PUBLICITY MATERIALS AND INTERNET ADVERTISING/WEBPAGES FOR THE PLAY:
“True Colors of Weedle is presented through special arrangement with Leicester Bay Theatricals.  All authorized materials are also supplied by LBT, www.leicesterbaytheatricals.com”