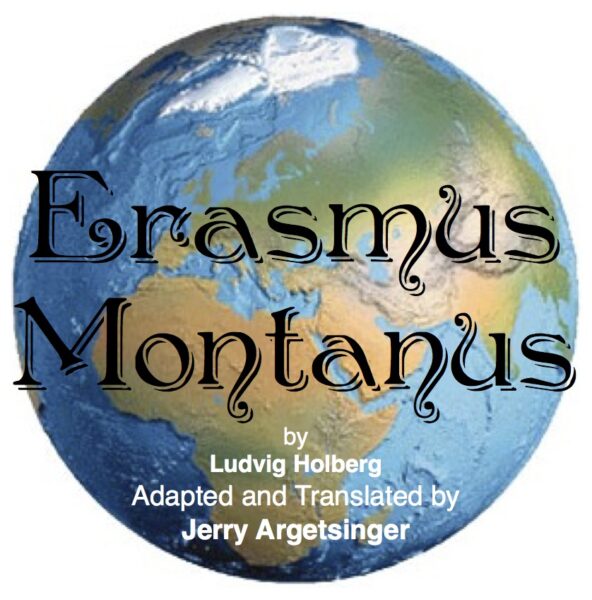 (For production by Professional, Educational and Community theatre groups.)

Holberg’s literary masterpiece satirizing current university academic courses and outlining his own theory of university education. Rasmus Berg, who has taken as his name the Latin equivalent, Erasmus Montanus, is the epitome of the sophmore, or wise fool.  He has learned his academic requirements but he has no idea of their use in real life.  The play opens with his parents, Jeppe and Nille, anticipating with Deacon Per the recent graduate’s coming home to his peasant farm near an outlying Danish village.  Per convinces the couple that as a deacon he fully understands Latin, although his demonstrations reveal that he knows almost nothing and much of what he thinks he knows is incorrect. But his congregation respects him and believes him to be educated. When Erasmus arrives he grandly displays his academic mannerisms and education and fails in his attempt to demonstrate that Per is really just an uneducated fool. This conflict escalates into an academic duel wherein Erasmus fails in his attempt to promote his own knowledge and belittle the popular deacon.  Erasmus’ brother Jesper then attempts to reason with Erasmus, that a farmer who understands how to successfully raise crops is more important than an academic with no usable skills.  Erasmus next insults and drives off his hometown sweetheart, who leaves heartbroken that he cannot give in to save their relationship.  Ultimately a Lieutenant who understands Latin and disputation enters into a contest with Erasmus and soundly trounces the arrogant young scholar and conscripts him into the military.  When the angry family and friends of Erasmus see his misery at being a soldier, they agree to buy out his enlistment if he agrees that his sophistry is wrong and that he promises to engage in beneficial employment. Against everything he swears is true, he finally agrees. ORDER #3111.

The following is how the credits should read in all programs, posters, fliers, handbills and other promotional advertising for the show:
Erasmus Montanus
by Ludvig Holberg
Adapted and Translated by Jerry Argetsinger

THIS NOTICE MUST APPEAR IN ALL PROGRAMS, ON ALL POSTERS AND PUBLICITY MATERIALS AND INTERNET ADVERTISING/WEBPAGES FOR THE PLAY:
“Erasmus Montanus is presented through special arrangement with Leicester Bay Theatricals.  All authorized materials are also supplied by LBT, www.leicesterbaytheatricals.com”