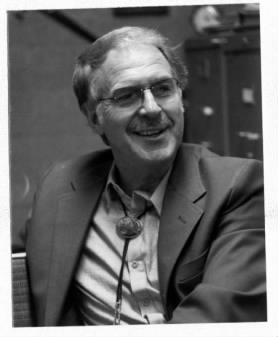 Max Chatterton Golightly was born May 19, 1924 in Preston, Idaho, to Joseph William and Mable Chatterton Golightly.
He lived in Rexburg, Idaho during his high school years. He graduated from Madison High School in 1942, where he had been active in dramatics and won a scholarship in vocal music.
As part of the United States Special Corps during the Second World War, he became a member of The Chapeliers, a singing, entertainment company, which toured the European Theatre of Operations in USO and Red Cross centers all over Europe.
In December of 1945, this group provided the choral members for the funeral of General George S. Patton in Heidelberg, Germany, at the request of the widow of the General.
General Patton had survived two great wars, but he suffered a broken neck in an auto accident in Germany in early December. He fought back from the edge of death, but 12 days after the accident, a lung clot brought death suddenly and peacefully.
Max Golightly returned to Provo, Utah, where he enrolled at BYU, majoring in radio broadcasting.
In 1948 he had written a varsity show, “Significant Spring” and as the director was auditioning talented students for the show. A young lady named Beverly Keith, an art student, auditioned as a tap dancer for the show. Max selected Beverly for that part, and their acquaintance soon blossomed into romance.
Max and Beverly were married that fall, on September 17, 1948 in Manti, Utah.
Beverly’s parents were William Jairus Keith, Jr. and LaVon Penrod Keith. Born on April 17, 1927, in Elberta, Utah, Beverly had attended Franklin and Maeser elementary schools, and had graduated from Provo High School in 1945.
Max earned a Bachelor of Arts in radio broadcasting from BYU, graduating in the BYU Class of 1949.
From 1957 to 1961 Max Golightly taught speech and theatre arts at Brigham Young High School in Provo.
Earlier, he had taught speech and drama from 1951-53 at Provo High School, and from 1953-57 at Citrus Junior College in Glendora, California.
During his various teaching assignments, he completed his Master of Arts degree at BYU with an emphasis in playwriting and directing.
He joined the faculty at BYU in 1961 where he became Professor of Theatre and Cinematic Arts, teaching there until his retirement in 1989.
He was an accomplished and well-known writer, and received national honors and first place prizes in poetry and play writing. His theatrical writings consist of some 30 plays, titles from which won local, regional and national recognition. His poetry also garnered its share of publication and awards. Mr. Golightly was listed in several Who’s Who Anthologies in Theatre and Civic Affairs.
During 1968-69, he served as president of the national Federation of State Poetry Societies of America, shortly after winning a publication award for his first book of verse, “Ibid.”, and in 1970 was chosen Utah Poet of the Year for his book, “A Morning of Taurus.”
In 1978 he was honored by the Louisiana State Poetry Society as “Distinguished American Poet,” for his encouragement of young poets in America, and was given a key to the city by the mayor of New Orleans.
He was a distinguished lecturer and reader, acted in 12 movies and in more than 30 plays, and directed 54 productions, musicals and operas.
Mr. Golightly’s many roles included Charles in Blithe Spirit in March 1974 at the Promised Valley Playhouse in Salt Lake City. Among the numerous plays he has directed are the opera La Boheme, Kiss Me Kate, How To Succeed in Business Without Really Trying, The Little Foxes, Richard III, and the world premiere at BYU of the opera Pilgrim’s Progress, and the musical by Carol Lynn Wright Pearson (BYH Class of 1957) The Order ls Love.
His play The Moonview won a Utah Fine Arts Award in 1974 and was produced at the Moab, Utah, Community Theatre. In 1975 he was Guest Director at the Playmill, West Yellowstone, Montana. Mr. Golightly was chosen to direct the musical extravaganza Brigham for the 1976 Bicentennial celebration in Provo, which featured a cast of 120 and played in the BYU Marriott Center for seven nights.
He directed numerous plays, including tragedies, comedies, farces, melodramas, musicals and premieres galore, for Max was “father” to the new play program at BYU in the 1960s. He also helped develop the Mask Club program and the Playwrights/Directors/Actors Workshop.
Max Golightly taught 28 years at BYU
Beginning in 1989 he served on the Provo Fine Arts Council, and was honored with the Outstanding Contribution of the Cultural Arts of 1992 award.
Throughout his life, he was active in and served many leadership positions in the LDS Church. During 1993 to 1995, he served an LDS Church Service Mission as Chairman of Casting for Church Films.
He was described professionally as moderator of playwriting, actor, vocalist, Master of Ceremonies, show host; director of plays: contemporary, classical, and special-effects characterizations; lecturer in acting, playwriting, play directing, poetry, self encouragement.
He had the gift of giving of himself, of his time, and of his talents, to anyone who needed them, after which he became their greatest fan, the greatest support, and the greatest praiser of these same talents in others. When Max stood in a group he rarely stood to be seen as himself. He was the first to stand in ovation for another person.