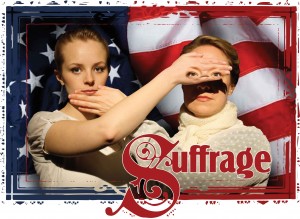 a play by Jenifer Nii

Two sister wives navigate Utah’s little-known place in history as the second U.S. territory to give women the vote.

(For Professional, Educational and Amateur theaters.)

SUFFRAGE is an exploration of late 1800s Utah, the second territory in the Union, by 1870, to grant women the right to vote. Wyoming had previously granted that right in 1869. That right was stripped 12 years later when suffrage became a whip for Washington politicians who wanted to end polygamy. The two issues became entwined in a strange, more-than-a-little-malicious way. During the two decades portrayed in the play, Utah women found themselves being called upon to stand strong on two equally threatening fronts. And they did. The story of Ruth and Frances, conveys a bit of what women—particularly polygamous women—faced. The attack was on their way of life, which in so many ways must have felt like an attack on their God and family. The overhanging threat was that women might again be deprived of what in so many ways is a recognition of their humanhood—their right to speak, to affect, to change the world in which they are citizens. Do we believe that we, each of us, can change our world for the good—and are we willing to do what we say we believe? This is the foundational thread of this most incredible play.

RUTH: in her early 20s, the fourth of five wives. Becomes passionate about winning the vote for women, and that she and other women have the right to be seen and treated as equals. There is mounting frustration with the notion that a woman must submit to her husband and all men. This is the only life she has ever known, and she is shocked and attracted to the thought of another.

FRANCES: a generation older than RUTH, the second of five wives. She is more “practical,” worried about running out of money, running a household, keeping the family together until her husband returns. She believes that she already has a voice and that she is fulfilling an even greater role and endowed by an even greater authority—at present and into eternity—by holding firm to her faith and her stewardship over her children.

Plan-B’s SUFFRAGE is not to be missed
Posted by Melissa Leilani Larson | Apr 6, 2013 Utah Theatre Bloggers

(EXCERPT) “I enjoyed this production very much, and there are a number of levels to that enjoyment. First and foremost is Jenifer Nii’s elegant dialogue, lean and lovely and carefully constructed. Her words are well chosen and never wasted, and they instantly transported me to the Utah of 1887… I think that’s probably the highest praise I can give a piece that could, in less skilled hands, have been an exercise in bashing or preaching. Suffrage is about people. Days after seeing it, I still care about these sisters who are like—and yet unlike—me. I didn’t come away from the performance incensed; rather, I had a clearer understanding of a social practice I have looked at askance for so long. I felt for these women, for their trials and their victories. Plan-B’s current production of Suffrage is a gem. I highly recommend it. It’s the best play I have encountered touching on polygamy, and I’m grateful to have experienced it.”

Review: Plan B Theatre Company’s “Suffrage”
April 6, 2013 by Chelsea Kilpack (SLC Feminist)
“Plan B Theatre Company never ceases to amaze me. I always leave their shows tearful, in awe of the performers, and grateful for the stories they produce in Salt Lake City. The world premiere of Jenifer Nii’s Suffrage was no different; it met and exceeded all of my expectations for a Plan B production…Everything in the production, from the hairstyles and dresses, to the amazing onstage desert-scape, will leave you in awe. You will think differently about the impact government can have when legislating love and the power of sisterhood in trying times. Nii’s story reminds us that sisterhood has always been powerful, and its power shines through in the unlikeliest climates and times.”