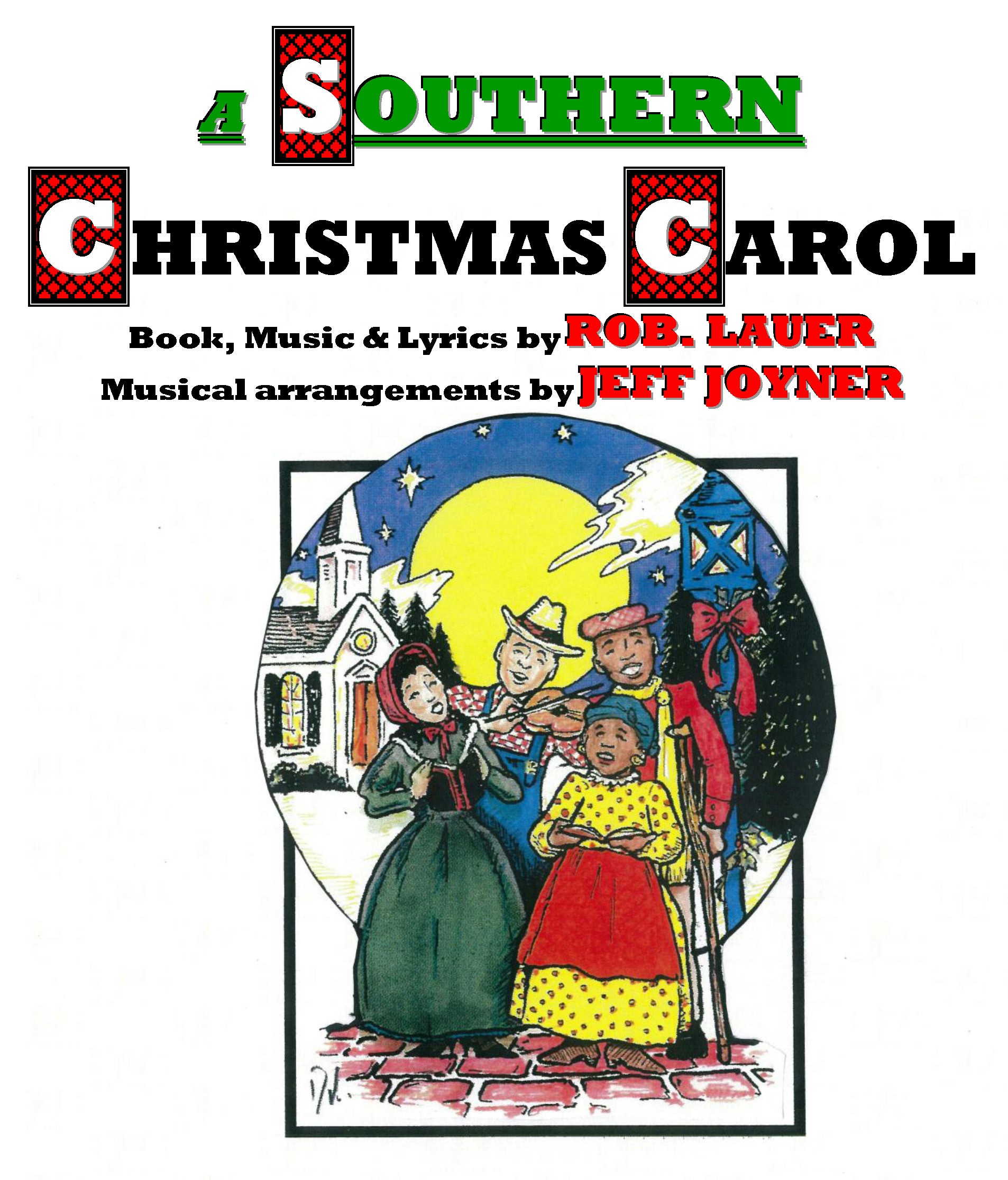 Looking for a funny, deeply moving, musical Christmas show that will entertain audiences of all ages and backgrounds?…A critically acclaimed musical that can be produced with as few as 10 actors or with as many as  30? Then look no further!

When “A Southern Christmas Carol” premiered in 2003, critics called it “good fun…a hoot that warms the heart”… “Lovely, there’s no other single word to describe it…Charles Dickens himself couldn’t have written a better account of the spirit of Christmas. At least not Christmas in 1933 Depression-ridden Southwest Georgia.”

In “A Southern Christmas Carol,” award-winning playwright Rob. Lauer moves the classic tale of Scrooge  from  1840’s London to Depression-era rural Georgia during the height of Jim Crow laws. “Though most of the world knows how Dickens’ story ends, Lauer did such an excellent job of tailoring the original story to fit the South that one is eager to see how this story will end,” The Albany Herald enthused; “Meant to explore some Southern themes like agriculture, racism and poverty, Lauer pays close attention to detail: cotton, overalls, accents, home-brewed liquor, biscuits, square dancing, gospel singing, Southern hostility and hospitality, ‘ain’ts’ and hope chests, pork and collards.”

The show’s musical score will send audiences out of the theatre humming songs that are set to become Holiday standards. Best of all, “A Southern Christmas Carol” is the perfect choice for theatres (professional or amateur) on a budget: it can be produced with only 10 actors (6 men/4 women), with each playing multiple roles.  Or it can be produced by theatres, churches, schools and civic groups who want to involve 30 or more performers in the show.

Funny, moving, emotionally satisfying; innovatively new while also feeling familiar—“A Southern Christmas Carol” is a show that could easily become an annual Holiday tradition for your theatre—something that will set it apart from all other theatres in your area.  Once your audiences have experienced this unique take on a Christmas classic, they’ll never say “Bah, Humbug” again!

VISIT THE OFFICIAL FACEBOOK PAGE FOR “A SOUTHERN CHRISTMAS CAROL”

Read below what the critics have written, and then inquire to see if “A Southern Christmas Carol” isn’t the perfect holiday treat for your theatre or organization.

“As a dear friend would say, “Lovely.” There is no other single word to describe the Colquitt/ Miller Arts Council’s first professional production, “A Southern Christmas Carol.” Though the mastermind of 1843’s “A Christmas Carol,” Charles Dickens himself couldn’t have written a better account of the spirit of Christmas—at least not Christmas in 1933 Depression-ridden southwest Georgia. “Daddy’s family lost everything in the war,” says Belle, Scrooge’s once fiancée, in a coy, sad and graceful Southern slur. “The whole lot of them ain’t nothin’ but sharecroppers now.” Meant to explore some Southern themes like agriculture, racism and poverty, Lauer’s play pays close attention to detail: cotton, overalls, accents, home-brewed liquor, biscuits, square dancing, gospel singing, Southern hostility and hospitality, “ain’ts” and hope chests, pork and collards. The 10-actor cast portrays 25 characters phenomenally, including the ghosts of Christmas Past, Present and Yet-To-Be, farmers and Scrooge’s maid, a woman named Eppie whom the old man just calls “girl.” …”Yessuh, Mr. Scrooge sir,” she often replies as Scrooge beats her down with his demoralizing words of superiority. …Though most of the world knows how Dickens’ story ends, Lauer did such an excellent job of tailoring the original story to fit the South that one is eager to see how this story will end. The traditional and original music adds so much to Dickens’ and Lauer’s funny, sad yet inspiring story. Often the crowd was in laughter or tears. …This season, treat yourself and your loved ones to something truly beautiful, honest and original and head to Colquitt for “A Southern Christmas Carol.” You won’t be sorry. I wasn’t.”

“Bah! Humbug!” Since Ebenezer Scrooge first spat out that angry phrase, in the pages of Charles Dickens’ “A Christmas Carol,” published 160 years ago come Sunday, those words have summed up the bitterness of Yule phobics, soured secularists and Christmas curmudgeons. The phrase is “Bah! Horse hockey!” down in Miller County on the flat plains of southwest Georgia. I heard Old Man Scrooge say it on stage Wednesday afternoon. There, in “A Southern Christmas Carol,” presented in Colquitt’s Cotton Hall, Ebenezer Scrooge is a tight-fisted cotton gin owner, the richest and most hated man in a small Southern town in the Depression year 1933. The show is a fresh musical translation of the well-worn story of 19th Century London. I’ve seen other adaptations of the work; this one really works. It’s faithful to the original in much of Dickens’ dialogue, character drawing and events, but it shows a sensitive ear for southern talk, music and religious sensibility. As Clarence Jordan’s “Cotton Patch Gospel” is to the New Testament original, so Rob Lauer’s musical is to the original Dickens story and its stagings. It is also good fun, a hoot that warms the heart…. …In this version, Bob Cratchitt and Tiny Tim are replaced by Eppie, a black maid, and her grown polio-lamed son, Tiny. The delegation soliciting for poor relief becomes an evangelical missionary couple seeking funds to minister to Depression victims. In place of the Londoners who discuss Scrooge are farmers. Jesus comes into the picture much more than in Dickens’ original. But the ghosts of Christmas past, present and future are there, as are Scrooge’s sister, fiancé and nephew Fred. So are the three crones who scavenge his personal effects. Appalachian and African American carols precede the show. Among the nine original songs are “Ain’t No Rest For the Wicked,” about Marley’s ghost; “It’s All Because of Santa Claus,” “God Bless Us Everyone,” and “Satan’s Having Company This Christmas”–an hilarious comment by a trio of farmers on Scrooge’s supposed death.

DEMO SAMPLES in mp3 form are available below.

A SOUTHERN CHRISTMAS CAROL
A Musical

Based on “A Christmas Carol in Prose: A Ghost Story of Christmas”
By Charles Dickens

THE ADDITIONAL PHRASE:
“Scrooge and Marley Tobacco Company”
may be used under the title itself, or after the credits block.

THIS NOTICE MUST APPEAR IN ALL PROGRAMS, ON ALL POSTERS AND PUBLICITY MATERIALS AND INTERNET ADVERTISING/WEBPAGES FOR THE PLAY:
“A Southern Christmas Carol is presented through special arrangement with Leicester Bay Theatricals.  All authorized materials are also supplied by LBT, www.leicesterbaytheatricals.com”