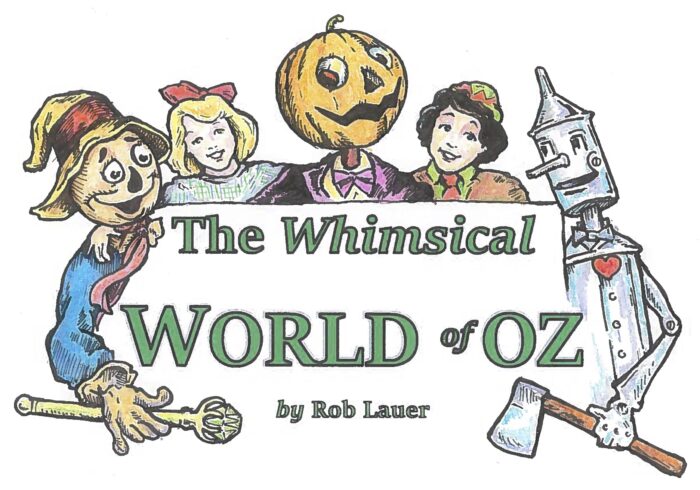 A comedy for the young by Rob Lauer

Based upon the famous Oz books by L. Frank Baum

In this comedy adventure, Dorothy returns to the Land of Oz just as Mombi the Witch is about to conquer the Emerald City and overthrow the Scarecrow, who serves as its king. Setting out to warn the Scarecrow, Dorothy meets new friends along the way: Jack Pumpkinhead, Billina the talking hen, Eureka the wise-cracking cat, and a mysterious boy named Tip. When her old pal Tin Woodman and the Wizard of Oz himself enter the scene, the identity of the Emerald City’s rightful ruler is revealed, and everyone sets about to defeat Mombi and find the lost princess of Oz.

Since first premiering at The Rocky Mountain Theatre Conference, “The Whimsical World of Oz” has brought laughter to audiences across the country. The show can be produced using actors of any age. With doubling-casting, the show has been produced with as few as eight actors; larger productions have used 18 or more actors. Some productions have even used puppets to portray some of the characters. The show can be easily produced on an empty stage using portable set pieces and props to set the scenes—making it perfect for theatres on a budget. Or it can be staged with elaborate sets.

“The Wizard of Oz” is the great American fairy tale and was immortalized in the classic 1939 MGM musical. But many people don’t know that “The Wizard of Oz” was only the first in a series of 40 best-selling Oz books published between 1900 and 1963. “The Whimsical World of Oz” brings to life characters and events from four of the Oz books: “The Land of Oz,” “Ozma of Oz,” “Dorothy & the Wizard in Oz,” and “The Emerald City of Oz.”

“The Whimsical World of Oz” allows you to take your audiences on a laugh-filled journey on which they’ll discover new things about a fantasy land they think they already know.

The PERUSAL PAGES file (in PDF format) containing half of the script is available here: Whimsical…Oz PERUSAL SCRIPT 3334

Another OZ play: LAND OF OZ by J.D. Newman

THE WHIMSICAL WORLD OF OZ

(Adapted from the L. Frank Baum books)
by
Rob Lauer

THIS NOTICE MUST APPEAR IN ALL PROGRAMS, ON ALL POSTERS AND PUBLICITY MATERIALS AND INTERNET ADVERTISING/WEBPAGES FOR THE PLAY:
“The Whimsical World of Oz is presented through special arrangement with Leicester Bay Theatricals.  All authorized materials are also supplied by LBT, www.leicesterbaytheatricals.com”

PRODUCTIONS PHOTOS FROM THE RMTA/BYU PRODUCTION: