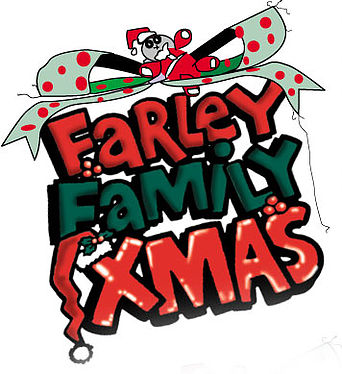 The peculiar but all-too-recognizable Farley family is having their annual holiday party. The audience is name-tagged on entrance making the “Family.” Heber Farley (Family President) introduces stranger and increasingly hilarious family members who sing – nearly on key, dance – without rhythm, play instruments- strangely, give eccentric advice. The ‘Family Program’ creates Christmas chaos that that leads to uproarious, side-slapping heights. Several audience/family members are brought onstage and are proudly given ludicrous prizes. The Farleys remind us of all our odd aunts, uncles, cousins, and neighbors. The humor is clean, the characters are more and more outrageous. The saving grace? After all is said and done, they still love everyone… even you!

The PERUSAL PAGES file (in PDF format) containing half of the script is available here: Farley Family Xmas PERUSAL
The video version of the play is available at: James Arrington Productions

EMAIL us for rights and information. Be sure to give us anticipated performance dates and the address of your group and, if different, your theatre. Please also include a contact name and phone number.
You might also be interested in these Farley Family TITLES:
The Farley Family Reunion (#3192)

(Adapted from his one-man show)

THIS NOTICE MUST APPEAR IN ALL PROGRAMS, ON ALL POSTERS AND PUBLICITY MATERIALS AND INTERNET ADVERTISING/WEBPAGES FOR THE PLAY:
“The Farley Family Xmas is presented through special arrangement with Leicester Bay Theatricals.  All authorized materials are also supplied by LBT, www.leicesterbaytheatricals.com”