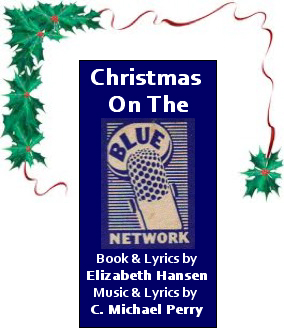 PERFECT FOR PROFESSIONAL, COLLEGE/UNIVERSITY, AND COMMUNITY GROUPS TO PREMIERE DURING THE HOLIDAYS, OR ANYTIME, REALLY.

Christmas Eve in 1943. The war still rages in Europe and the Pacific, as, outside of Cleveland, Ohio, WCCR, a small radio station, struggles to survive not only the worst blizzard in 100 years, but with the fact that it’s pretty near broke. “Christmas On The Blue” centers around Doris Irving, the woman who runs the station, who has not heard anything about her MIA husband, Morris, since July of 1943. Suspecting the worst, she may be forced to close the station as WCCR, a member of the “Blue Network”, (which has struggled since its separation from NBC) has lost nearly all of its advertising to stations still affiliated with the larger networks.
All her prayers have gone unanswered and she’s just about given up hope. Then, from out of the blizzard, a handsome stranger, NICK ANGELO, appears, who seems to be an “answer to their prayers,” showing up out of nowhere. He can sing, act, dance…there doesn’t seem to be anything he can’t do. But there’s something about this guy. Something Doris can’t put her finger on, something familiar, something…wonderful. And everyone can feel it.

There are also a few surprises for the staff of the radio station, as Sparky (Horace Irving), the son of the owner frequently plunges the station into darkness. The singing duo of Teddy and Betty vie on the air and off as their romance sours and sweetens — repeatedly. The Sullivan Sisters, a trio of Flora, Nora and Cora sing the jingles and play in the sketches. We find that Sparky is kind of sweet on Cora. “Nick” Garland seems to be just what the station director ordered — someone who can fill in for the missing Morris Irving and help run the studio — and make it successful. They look on him as an angel, and Doris, missing Morris, tests the waters. They work to get one big sponsor; someone to invest in the station and push them to solvency. Nick seems to be their ticket to finding that sponsor. It all hinges on one broadcast of their local hillbilly comedy “The Shenanigans”. In a last-ditch effort, Doris and Nick have arranged for the last possible client that is big enough to dig them out of debt, to listen to the show that night. If he doesn’t come through with a sponsorship, they’re finished. At the big broadcast — everything goes wrong. However, the show twists and turns until all are happy — even Doris.
The songs are classical musical theatre with a big band influence. The ‘blue’ in the title refers to NBCs “blue” network — a very popular format through the 30s and 40s: local talent mixed with live broadcasts of major stars and songs.

(For production by Professional Groups, College/University Groups, Community Groups. Leicester Bay Theatricals is acting as AGENT for this musical. It is not considered a PUBLISHED musical, but one that is “in-process”. You will actually be negotiating the rights with the authors themselves, as we at LBT will be referring you to them.)

PERUSAL SCRIPT: The PDF of 1/2 of the script (Act One) is available: COTB PERUSALCOMPLETE051217

The following is how the credits should read in all programs, posters, fliers, handbills and other promotional advertising for the show:
Christmas On The Blue

A New Musical for Christmas

“Christmas On The Blue” is presented through special arrangement with Leicester Bay Theatricals.  All authorized materials are also supplied by LBT, www.leicesterbaytheatricals.com”