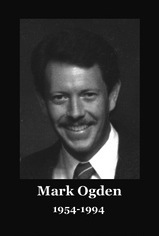 Mark Ogden, composer, lyricist and book writer, and also founder of St. George Musical Theater, often said writing and producing a play was like having a baby. Once he conceived of an idea, it would grow and grow until he had to put it on paper and write music to accompany the dialogue. Finally, when the baby emerged on stage, it was a joy to behold as the newest member of his family.
St. George Musical Theater was another of his babies. Conceived in the mid 1980’s, this tiny nursery of players rehearsed, presented, reviewed, and revised Mark’s dramatic work. In 1988, Mark’s directing abilities won him the privilege of directing It’s My Life by Carol Lynn Pearson. Sponsored by Southwest Mental Health, he and the show traveled to many Southern Utah schools and kept the dream of St. George Musical Theater alive.
Tragedy struck in 1992 when Mark Ogden was diagnosed with AIDS. He fought a long, difficult battle with the disease, but passed away two years later in 1994 leaving St. George Musical Theater an orphan.

OTHER PLAYS AND MUSICALS: (some soon to be represented by LBT or ZT)