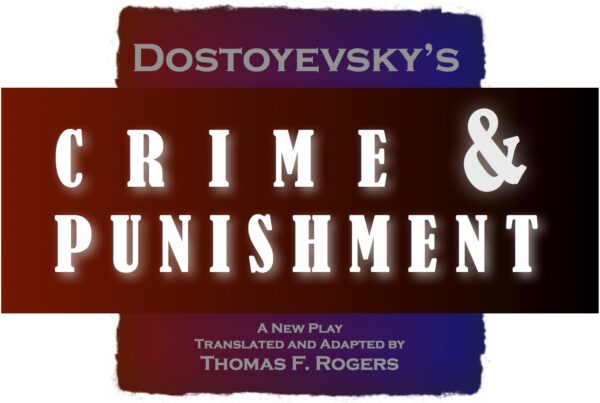 (Can be produced by Professional, College/University, Community and High School groups.)

CRIME AND PUNISHMENT focuses on the mental anguish and moral dilemmas of Rodion Raskolnikov, an impoverished ex-student in St. Petersburg who formulates and executes a plan to kill an unscrupulous pawnbroker for her cash. He argues that with the pawnbroker’s money he can perform good deeds to counterbalance the crime while ridding the world of a worthless vermin. He also commits the murder to test his own hypothesis that some people are naturally capable of such things and even have the right to so behave. Several times throughout the novel, Raskolnikov justifies his actions by comparing himself with Napoleon Bonaparte, believing that murder is permissible in pursuit of a higher purpose. Although not a playwright, Dostoevsky has been cited as having “the greatest natural dramatic temperament since Shakespeare.” Originally titled THE DRUNKARDS, CRIME AND PUNISHMENT is the first of four masterful nineteenth-century novels that unprecedentedly explore social issues which beset humankind to this day, including child abuse and the mistreatment of women. These classic works are also deeply religious, treating the psychological turmoil and spiritual yearning of flawed, often rebellious human beings (crime and PUNISHMENT, THE BROTHERS KARAMAZOV) and the nature of God himself (THE IDIOT, THE DEVILS)).  After the fall of the Soviet Union, Dostoevsky was canonized as a Saint by the Russian Orthodox Church. CRIME AND PUNISHMENT has been cited as one of the world’s great detective novels, whose mystery is not the perpetrator’s identity (which is known from the outset), but, more intriguingly, the protagonist’s very own search for the motive of his crimes.

Crime and Punishment
A translation and adaptation of the Fyodor M. Dostoyevsky novel
by
Thomas F. Rogers

THIS NOTICE MUST APPEAR IN ALL PROGRAMS, ON ALL POSTERS AND PUBLICITY MATERIALS AND INTERNET ADVERTISING/WEBPAGES FOR THE PLAY:
“Crime & Punishment is presented through special arrangement with Leicester Bay Theatricals.  All authorized materials are also supplied by LBT, www.leicesterbaytheatricals.com”