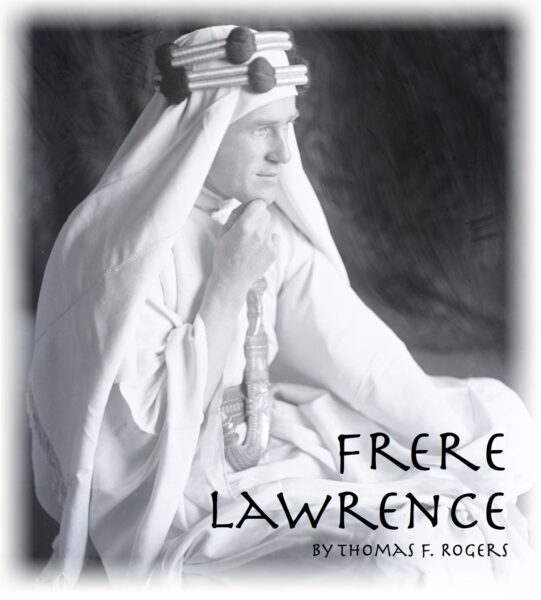 (For production by Professional Groups, College/University Groups, Community Groups)
The late private life of T. E. Lawrence derives from Lawrence’s posthumously published autobiography, The Mint. A military hero of mythic proportions after WW I and dutifully subject to his society’s stringent Victorian mores — so antithetical to his true nature — he later adopts the surname Shaw and chooses anonymity as a non-commissioned serviceman, thus totally expunging his former identity, a kind of suicide. The noble, neurotic Lawrence evokes our nearly insatiable and often frustrated yearning for intimacy, or as Freud titled it, the “discontent” of “civilization” — the perhaps most fundamental socio-biological root of everyone’s ‘double bind,’ for which talent and prominence are ultimately no sublimation and often the catalytic source of a deep seated loneliness. Both with a mix of present tense and flashback (derived from Lawrence’s classic memoir, The Seven Pillars of Wisdom, and through the eyes of so-called intimates, the story unfolds as a nightmare of images and aural effects that weave the fabric of the “genius” known as “Lawrence of Arabia.” Contains adult language and situations.

THIS NOTICE MUST APPEAR IN ALL PROGRAMS, ON ALL POSTERS AND PUBLICITY MATERIALS AND INTERNET ADVERTISING/WEBPAGES FOR THE PLAY:
“Frere Lawrence is presented through special arrangement with Leicester Bay Theatricals.  All authorized materials are also supplied by LBT, www.leicesterbaytheatricals.com”